GeriJoy Releases Spike the Dog, a Rugged Yet Friendly Companion for the Elderly

GeriJoy Companions are intelligent, talking pets that serve as 24/7 companions for seniors, backed by GeriJoy's team of conversational and supervisory staff. The newest addition to the GeriJoy family is modeled after an adult boxer dog, and is a great fit for seniors who prefer a more rugged, realistic look. 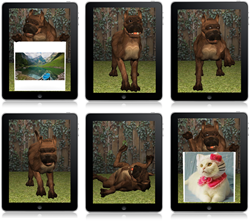 It's a funny coincidence that we are releasing Spike on Halloween. He's not scary looking, though you do get the impression that he's tough to scare!

GeriJoy announced that on Oct 31, it is releasing the newest member of the GeriJoy family: Spike the Dog. The current GeriJoy Companions, Buddy the Dog and Mimi the Cat, are both adorable in a dainty way, and have been received very well by most seniors and caregivers. However, for those who prefer a more rugged, realistic look, Spike offers an alternative modeled after an adult boxer dog.

GeriJoy's CEO, Victor Wang, commented, "It's a funny coincidence that we are releasing Spike on Halloween. He's not scary looking, though you do get the impression that he's tough to scare! For many seniors, Spike is the perfect choice for a GeriJoy Companion."

In addition to the altered appearance, the company has also introduced a variety of new behaviors that increase the level of touch interactivity with Spike; for example, the ability to roll him over and pet his belly. These new features will be adapted to Buddy and Mimi in the near future.

New GeriJoy customers who sign up at http://www.GeriJoy.com/subscribe can choose which GeriJoy Companion they would like. Existing customers who would like to switch to Spike can simply make the request via email. Pricing is identical for all three versions: $99/month for round-the-clock support from GeriJoy's care staff.

GeriJoy Inc. was founded by MIT researchers Victor Wang and Shuo Deng to improve quality of life for seniors and their families through friendly technology. The GeriJoy Companion, their flagship service, is a virtual pet and companion for the elderly that is backed by GeriJoy’s worldwide team of 24/7 care staff. The staff guide the pet’s speech to provide elders with the experience of having an always-available conversational companion that can talk with them about family photos and other information from the Internet. Essentially, the GeriJoy Companion is a talking pet that serves as a helpful family member, not only reducing loneliness and improving mental health for elders but also providing peace of mind and reducing stress for caregivers. GeriJoy has been recognized by organizations like AARP, TEDMED, and the US Senate as a leading innovator in senior care. The company is based in Cambridge, MA, and is backed by investors such as Blueprint Health and Esther Dyson. To find out more, or to order GeriJoy’s service for your own family or senior care organization, please visit http://www.GeriJoy.com or email info(at)GeriJoy(dot)com.

Testimonial of GeriJoy user Jonathan WangThis audio clip is a customer's testimonial of his experience with the GeriJoy Companion. In summary: "I believe that GeriJoy is just simply wonderful. It just brought great smiles to [my grandmother's] face. We couldn't be any happier to have our grandma