Ohio web and graphic design firm Blitz Media Design has announced that Scott de Fasselle's logo designs were selected for two teams of the Lewis & Clark Baseball League. Designs were submitted as part of an open contest that culminated with attending the league’s All Star game in July. 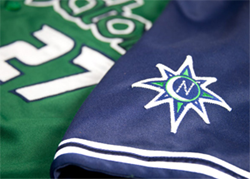 It’s exciting to see my design work come to life on a baseball uniform.

The team names are based on derivatives of Meriwether Lewis and William Clark’s various job titles. Having 12 teams describing the same two historical figures required some creative thinking to forge unique visual identities. Scott de Fasselle’s winning designs were for the Navigators (scheduled to start play next season) and Lookouts.

For the Navigators baseball team logo, Scott created a crescent moon and constellation design inspired by navigation techniques used by Lewis and Clark. The league was torn between this initial design and the entry by Fooser Sports Design, and asked both to collaborate on combining their work into the final design on the uniforms.

As Lewis mentioned the Great Horned Owl a few times in his journals, Scott thought the bird would be an ideal mascot for the Lookouts baseball team logo.

According to Scott de Fasselle, “It’s exciting to see my design work come to life on a baseball uniform, and I’m grateful to everyone who supported me.”

About Blitz Media Design
Started as Web Refinements in 1999, the Ohio design firm serves clientele across the globe. "Designing for Results" is more than the company's slogan — it's their guiding principle. The design focus is making profit for commercial clients, and getting converts for non-profits.

The company believes that design is not simply about art — a successful design project has specific marketing goals, and requires a collaboration of the client's product or service expertise with Blitz Media Design's design and usability experience.