SPS improve ID card security thanks to CMI+, increasing the support for additional government emblems on the micro module 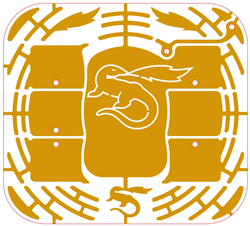 CMI Plus module, by SPS

Dominique Charrie, SPS Marketing Director, government products, says: “Fighting counterfeiting is the essence of SPS technology development. With CMI+, we are bringing a breakthrough in security for governments as adding material is substantially more difficult for counterfeiters than removing it.”

SPS is proud to introduce CMI+, Customized Module Image Plus, a new security feature dedicated to ID documents that consists in including the coat of arms or other government emblems or symbols on the card’s micro module. This is done by removing material in the micro module’s center and also by adding symbols in previously unattainable locations. For instance, with CMI+, a micromodule can be designed with a combination of a large representation of the coat of arms in the center with smaller national symbols on peripheral locations of the module.

This new CMI+ security feature makes it increasingly more difficult for potential counterfeiters to modify an existing micro module: not only would they need to remove material from the module surface but they would also have to add some material with a very thin and specific design while conserving the surface aspect of the micromodule, something practically unsurmountable with the limited non-industrial means of potential fraudsters.

CMI+ is already available for SPS Dual8, for dual interface cards, and Hybrid8, for hybrid cards, with a gold or silver finish. SPS is already in advanced talks with several governments for the adoption of this feature. The new CMI+ security feature builds upon the longstanding expertise of SPS in physical security for ID documents. CMI, Customized Module Image, which consists in including government symbols in the center of the micromodule, has already been adopted by many governments worldwide for cards as diverse as national ID cards, foreigner residence cards, military cards, agent cards, etc.

Dominique Charrie, SPS Marketing Director for government products, explains: “Fighting against counterfeiting has been the essence of SPS technology development for many years. With CMI+, we are bringing a breakthrough in security for governments as adding material is substantially more difficult for counterfeiters than removing it.”

This new CMI+® completes the SPS offer for distinctive security features that reinforce the security of the ID document:

SPS eBoost® inductive coupling technology, which consists in using electromagnetic coupling between the antenna and the module (no physical connection between the chip and the antenna), is easy to integrate for all smart card manufacturers. As there is no physical connection between the small antenna embedded in the micromodule and the large antenna etched inside the card, cards are more durable and easily stand the 10 to 15 years life expectancy typically required for identity applications.

About SPS
With the SPS brand, IN Groupe opens its secure components technology to all card and document manufacturers. SPS is specialized in the design, manufacturing and sale of contactless solutions dedicated to ID cards, e-passport and dual interface banking cards. Headquartered in Rousset, France, with a subsidiary in Singapore, SPS employs 200 people. The company specializes in contactless and dual-interface products, with a recognized micro packaging expertise. SPS has filed over 120 patents supporting its exclusive technologies. More information at http://www.s-p-s.com

SPS is part of the IN Groupe.

A partner of the French government for close to 500 years, IN Groupe offers identity solutions and secure digital services, at the leading edge of technology and integrating electronics and biometrics.
From components to services and from documents to interoperable systems, IN Groupe is a global specialist in identity and secure digital services. The institution plays a daily role in facilitating everyone's life: helping states exercise their sovereignty, citizens protect their identity and businesses preserve their integrity.

Whatever the issue, IN Groupe, a company for digital sovereignty, contributes to asserting a fundamental right for everyone: the right to be you.

Based in Paris, the IN Groupe has two production centers and employs more than 1000 employees, of which over a third is dedicated to technology development.