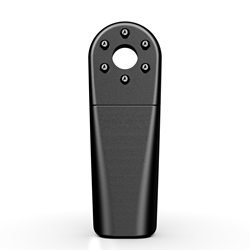 Hidden cameras make the news all the time... and those are just the ones that were found!

Scout, the new hidden camera finder that empowers everyday people to protect their privacy, launched today with an unprecedented combination of ease of use, affordability, savvy design, and professional-grade technology. Scout is like a security team in your pocket: it works on all cameras, is easy to travel with, and is the first high-quality camera finder priced below $100.

Hidden cameras have gotten smaller and less conspicuous over the years, and Americans are increasingly concerned as they are found in places like locker rooms, bathrooms, hotel rooms and vacation rentals. Some cameras are smaller than a button, built into mundane items like coat hooks and USB chargers.

This epidemic has been extensively covered by The Washington Post, The New York Times, The Atlantic, and more.

In the past, travelers were limited to a few insufficient options, like expensive hidden camera-finders that cost hundreds of dollars, or numerous, error-prone steps like scanning Wi-Fi networks, carefully inspecting many suspicious items, or using smartphone apps that claimed to detect cameras but fell short of that promise.

Scout is a breakthrough new option. It employs six special, high-powered LED lights to help users easily "scout" for hidden cameras in sensitive places. Plus, it comes with a pinhole camera to practice on so you know what you're looking for. Scout requires users to take just a few simple steps:

"Hidden cameras have become a huge problem for travelers," said Allen Walton, designer of Scout and founder of SpyGuy. "Nobody realizes how easy cameras are to hide. I get Google alerts all day long from media outlets, Reddit users, and other places that talk about the latest spy camera that was found in an Airbnb or Starbucks bathroom. Scout helps find cameras so you don't have to worry about what some stranger is going to do with videos of you in a private moment."

Scout draws on Walton's decade of experience as founder of SpyGuy, where he has served more than 75,000 people like new parents and law enforcement officials with surveillance and counter-surveillance solutions. Numerous high-profile hidden camera incidents and calls from concerned individuals inspired him to design this new, intuitive solution that helps everyone safeguard their privacy.

About Scout and SpyGuy:

Launched in 2019, Scout is a beautifully designed counter-surveillance product that finds hidden cameras in Airbnbs, hotels, dorm and locker rooms, and public restrooms.

SpyGuy.com was created in 2014 and has served over 75,000 customers, ranging from concerned parents and victims of workplace harassment, all the way to the DEA and Department of Justice. SpyGuy brings transparency, expertise, and great customer service to help people who need surveillance products to solve emotional or financial distress.