St. Augustine and John Wesley Would Not Be Happy with Numbers in empty tomb’s 30th Edition

St. Augustine and John Wesley, having challenged church members in their own time about giving, would not be happy with giving trends found in the thirtieth edition of empty tomb's series, The State of Church Giving through 2018. empty tomb Mission Match invites congregations and venture philanthropists to help tap more of church members' potential for good through increased missions giving. The focus is to help, in Jesus' name, 1.2 million children under five dying globally each year from treatable causes. 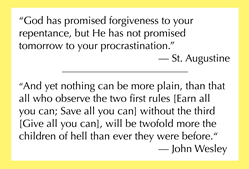 No doubt both St. Augustine and John Wesley would be working on sermons to challenge church members in the U.S. to use more of their potential for good.

The numbers in the 30th edition of empty tomb’s State of Church Giving series show declines in giving.

And St. Augustine and John Wesley, who lit into church members of their own time, would not be happy with the trends found in The State of Church Giving through 2018.

As discussed in the 27th edition in The State of Church Giving series, Augustine led the priests in his diocese to conduct a "war of giving," according to Peter Brown, Professor of History Emeritus, Princeton University. Brown has made major contributions to the study of the “antique” church (350-550 AD). He states that Augustine, as Bishop of Hippo, Africa, was clear that both poor and rich can struggle with greed. Yet, Augustine wanted his priests to wage this "war of giving" with a particular emphasis on those extremely rich who sponsored games in the arena to win public approval. According to Brown, Augustine trained his priests that those rich who sponsored the games rather than helping the poor were to be "condemned, rebuked and changed for the better … by which lazy members of our churches are to be challenged to action."

Meanwhile, near the end of his life, John Wesley, the founding leader of the Methodist Church, stated, "I know not what to do." He was frustrated because he would likely not find 500 of 50,000 Methodists who practiced all three elements of Christian discipleship he advocated. Many would earn all they can, and some would save all they can. "But how many have you found that observe the Third rule, 'Give all you can'? Have you reason to believe, that five hundred of these are to be found among fifty thousand Methodists? And yet nothing can be more plain, than that all who observe the two first rules without the third, will be twofold more the children of hell than ever they were before."

Today, church members in America find themselves in an age of affluence. According to Angus Maddison's analysis, the world's economy changed little from the year 0 until the mid-1800s. Since then, it has grown consistently larger.

And currently, the U.S. has the largest Gross Domestic Product in the world, and of the top 10 countries, the largest per capita GDP.

Facts from The State of Church Giving through 2018

St. Augustine and John Wesley were not happy with the way church members handled giving in their own day. They would also not be happy with these facts from the 30th edition in The State of Church Giving series.

No doubt both St. Augustine and John Wesley would be working on sermons to challenge church members in the U.S. to use more of their potential for good.

In light of these facts, empty tomb has designed its Mission Match® project to make it easier for congregations to tap more of this potential.

To apply to Mission Match, congregations design mission projects to target one of the 22 treatable causes of death in children under five in one of 40 countries. According to empty tomb calculations, these 40 countries were not on target to help meet the 2015 target reduction goal set for reducing the global Under-5 Mortality Rate deaths. The congregations also propose the delivery channel through which they want to work, in Jesus' name, to help prevent these deaths.

Congregations can apply for up to $3,000 for their project. Once approved, the congregation raises, from those within their local church, at least an equal amount, and then the congregation spends the combined money on the project named in their application.

Churches can learn more about how to apply for these matching contributions at missionmatch.org.

At the same time, empty tomb is seeking three to 10 venture philanthropists to provide major gifts the first year, 2021, in order to help congregations stop, in Jesus' name, 1.2 million annual deaths of children by 2025. At that point, the 40 countries should be on target to help the world achieve target reduction goals in the Under-5 Mortality Rate. These major donors would not only help to mobilize the more than 300,000 churches across the U.S., but they would also model heroic giving as promoted by St. Augustine and John Wesley.

Peter Brown is the Philip and Beulah Rollins Professor of History, Emeritus, and Senior Historian, History Department, Princeton University, Phone: (609) 258-4154. His books include Through the Eye of a Needle: Wealth, the Fall of Rome, and the Making of Christianity in the West, 350-550 AD, as well as Augustine of Hippo and The Ransom of the Soul: Afterlife and Wealthy in Early Western Christianity.

Kenneth Carder, retired United Methodist Bishop and currently Ruth W. and A. Morris Williams Professor Emeritus of the Practice of Christian Ministry, has written on John Wesley and the practice of giving. He can be reached through Duke Divinity School, (919) 660-3428.

This release is the latest in the recent empty tomb series. Following is a list of the previous releases:

May 11, 2021:
Whither Philanthropy? Young People Learn Giving in Church and the Church Is Weakening, empty tomb Book Finds

May 25, 2021:
Numbers in New empty tomb Book Locate the Heart of the Dying Church's Choice: Serve God, in Jesus' Name, With Money on a Scale with Global Need — or Serve Money