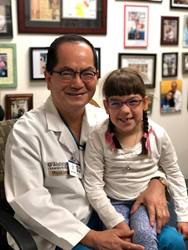 Ivy Rogers (7) from Australia has made history by becoming the 4,000th patient at St. Louis Children’s Hospital to receive specialized spine surgery to enable her to start walking, which she wasn’t ab

Thousands of families from 77 countries around the world and 49 states in the U.S. have brought their children to St. Louis Children’s Hospital for SDR. Seven-year-old Ivy Roger, from Australia, became the 4,000th child to take her first steps after this life-changing surgery perfected by Dr. Park. After just 28 days of recovery and physical therapy, Ivy went from her motorized wheelchair to taking her first steps using a walker.

“She took 100 steps down the hallway,” said Michelle Roger, Ivy’s mom. “To see her do that with so little support and we’re only five weeks from surgery, it’s blowing my mind, it’s way more than we expected.”

“I feel pretty weird and pretty proud of myself,” Ivy said, adding she looks forward to being able to step up to her mom for a hug whenever she wants.

SDR relieves the muscle stiffness, or spasticity, that causes pain and limited mobility in children with cerebral palsy. Dr. Park studied under the procedure’s pioneers in the 1970s, brought it to the U.S. in 1986, and customized it to make it more effective in 1991. Dr. Park’s minimally invasive SDR removes less spinal bone than previous procedures, typically resulting in fewer spine and back complications later in life. Depending on the patient’s condition, the surgery can result in moving from wheelchair dependency to walking with canes or even the ability to walk, run, and play with no assistance.

Today, Ivy is back in Australia, taking stronger and more confident steps each day and continuing her physical therapy. The Roger family’s joy at Ivy’s success echoes the elation thousands of families have felt over more than three decades as Dr. Park and his team have helped them take those first steps.

“Dr. Park developed – really single-handedly – the operation of selective dorsal rhizotomy for cerebral palsy,” said Ralph Dacey, MD, the chair of neurologic surgery at Washington University School of Medicine and St. Louis Children’s Hospital. “And not only did he develop the processes around doing that procedure very effectively and safely, but he was able to prove its efficacy in a series of papers that have become landmark studies.”

“Honestly, reaching 4,000 surgeries is not something I thought I would ever see,” said Dr. Park. “But with the advent of social media, families from around the world have been easily finding us. It’s increased our ability to connect and created greater recognition for how much we can help children with cerebral palsy. I feel truly blessed to be able to help them.”

Performing about 250 surgeries per year, St. Louis Children’s Hospital has a waiting list through June 2020. Dr. Park travels the world to follow up on patients and to perform the surgery on children who cannot travel to St. Louis. He has continued his pioneering work, using SDR to help more than 140 adolescent and adult cerebral palsy patients – who often experience more severe physical challenges around age 50 – regain motor function.

ST. LOUIS CHILDREN’S HOSPITAL
For 140 years, St. Louis Children's Hospital has provided exceptional care for children in all 50 states and 80 countries around the world. With its academic partner, Washington University School of Medicine, Children’s is consistently ranked among the nation’s best pediatric hospitals by U.S. News & World Report. A member of BJC HealthCare, St. Louis Children’s Hospital follows one simple mission – to do what’s right for kids. That mission comes to life through medical discovery, innovative therapies and compassionate care. In 2018, Children's expanded with a state-of-the-art, 12-story medical tower. Children’s relies on generous donors to deliver specialized care for families in need, extend health care services to the community, and pursue research that promises to transform pediatric medicine. To find out more, visit StLouisChildrens.org, Facebook, Twitter and Instagram.