Speaking in New York, St. Louis Fed President James Bullard said he views cryptocurrencies as new entrants into the ongoing global currency competition. “Cryptocurrencies are creating drift toward a non-uniform currency in the U.S., a state of affairs that has existed historically but was disliked and eventually replaced,” he said. 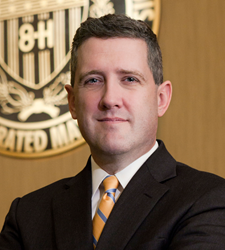 Bullard, who has contributed to the literature on “private money,” said research on the subject suggests that public and private currencies can compete and coexist. “Cryptocurrencies are creating drift toward a non-uniform currency in the U.S., a state of affairs that has existed historically but was disliked and eventually replaced,” he said.

Bullard noted that the international monetary system features non-uniform currency arrangements, but the volatile exchange rates that characterize the system have long been criticized. “Trying to fix exchange rates, as suggested by ‘stablecoins,’ has often failed,” he said.

Global currency competition is nothing new, nor is electronic delivery of value, Bullard noted. Many currencies are government-issued and supported by the monetary policy of the issuing government’s central bank, he said.

However, he added that there are also micro-currencies of many types. For example, he pointed out that cigarettes became a currency among POWs during World War II, and he quoted a folk theorem from monetary theory that says “anything can be a currency.”

“I want to view cryptocurrencies of various types as new entrants into the ongoing global currency competition,” he said.

Bullard pointed out that privately issued currency can fit into this context of many competing currencies. The literature suggests public and private currencies can coexist as part of an equilibrium, in which one type of money need not crowd out the other, he explained. In an equilibrium like this, he added, both are required to allow all voluntary trade to occur.

“Another prediction from the theory is that if private currency issuance is allowed, many private currencies would be issued,” Bullard said. “If we turn to the real world today, something like this appears to be happening.” He noted that more than 2,600 cryptocurrencies have been launched.

Bullard explained that consumers and businesses may not like a system in which many types of currency trade simultaneously at a variety of prices in a local market. “Currencies have to be reliable and hold their value,” he said. “This is probably why government backing has been important historically, combined with a stable monetary policy that promotes stability of the currency.”

“The problem of how to stabilize currency value is not mitigated by commodity-backed money, cryptocurrency or fixed exchange rates,” Bullard said.

He explained that under a gold standard, the government named the exchange rate between notes and gold, and governments sometimes altered this rate. With cryptocurrencies, there is monetary policy encoded in the system, but that system could bifurcate, creating two fixed volumes of coins instead of one—a process that can happen multiple times. Fixed exchange rate systems have often collapsed eventually, he added.

“One of the main lessons of monetary theory is that the credibility of future issuance policy is a key aspect to the value of a currency,” Bullard said.

Turning to an example, he noted that U.S. monetary policy is relatively stable, while Venezuelan policy has been unstable, leading the bolivar to devalue against the dollar. Bolivar holders were harmed relative to dollar holders due to unstable Venezuelan policy, he explained. “Cryptocurrencies can be subject to exactly this sort of failing credibility,” he said. “An issuing firm, for instance, could be associated with a failing business model, in which case the firm’s currency would also collapse.”

The chaos of exchange rates

Turning back to non-uniform currency systems, Bullard noted that societies have disliked such systems because the currencies trade at different values. This can be avoided by having a uniform currency, he added.

While countries have wanted a uniform currency locally, Bullard pointed out that globally, there is not a uniform currency. Instead it is a system of competing currencies with widely fluctuating exchange rates, even in the case of the U.S. and Japan, which both have had relatively stable monetary policies in place.

Bullard reiterated that the U.S. is drifting toward non-uniform currency trading arrangements, a system the society has disliked historically. He also noted that, globally, there is an example of a non-uniform system of currencies, but these currencies trade at exchange rates that are often viewed as excessively volatile.

Bullard concluded, “Cryptocurrencies may unwittingly be pushing in the wrong direction in trying to solve an important social problem, which is how best to facilitate market-based exchange.”