StabiLens announces the launch of its new website design and ecommerce site. The site was developed by LAD Solutions and can be found at Stabilens.com. 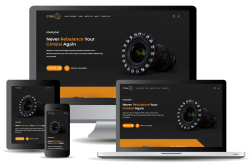 I invented StabiLens because I didn’t want to have to rebalance every time I wanted to change lenses. I wanted my gear to work for me and not the other way around

StabiLens, based out of Potsdam, New York, has launched a brand-new website and ecommerce shop at stabilens.com. It offers customers the chance to learn about and order the Stabilens Gimbal Ring System -- A first of its kind camera attachment that allows gimbal operators to swap lenses without having to rebalance. The new site has been developed and designed by LAD Solutions, a Los Angeles-based online marketing agency.

The traditional gimbal workflow requires users to balance their gimbal with every new lens, eating up precious time while on a shoot. With StabiLens gimbal ring, gimbal operators only need to balance their gimbal once to their largest lens. Each smaller lens is then counterweighted to match that weight distribution. Now, lenses can be hot swapped on set without wasting time rebalancing. Because the counterbalancing is done before getting out in the field it saves valuable shoot time allowing camera operators to be more creative and efficient.

“Gimbals are amazing tools. They give everyone the ability to shoot beautiful cinematic imagery, but they come with major drawbacks. I invented StabiLens because I didn’t want to have to rebalance every time I wanted to change lenses. I wanted my gear to work for me and not the other way around,” said Zac Miller filmmaker, inventor of, and CEO of StabiLens.

StabiLens can be customized to work with many setups. The ring itself can safely and easily fit over lenses between 58mm – 100mm. That will cover most mirrorless and DSLR lenses across every brand. It works with motorized gimbals as well as traditional balanced camera systems. Once balanced, lenses can be swapped as many times as needed without further rebalancing. This allows users to remove the StabiLens system at any time, say for instance if operators want to shoot on a tripod, and then reattach later when they go back to operating a gimbal.

Zac Miller invented the StabiLens™ Gimbal Ring. He began his career in 2005 getting his hands dirty on independent feature films in Boston. Since then Zac moved to LA and worked on Television shows, films, commercials, corporate videos, and web content for clients like CBS, ABC, 21st Century FOX, National Geographic, Diet Pepsi, HGTV, MTV and WGBH.