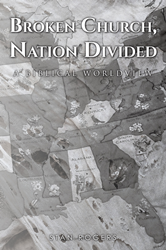 Rogers shares, “America is a nation divided to the extent that some are comparing it to the pre-Civil War era of the 1860s. That Civil War was violent, bloody, and hateful; and yet when it ended, America was almost immediately restored as one nation under God. It ended not without deep and enduring scars, but as a nation reunited well enough to become the industrialized leader of the free world for decades to come. We have always been divided socially, economically, and politically; but we have always been a nation united by our faith in the Christian God, the Creator of the universe and all that is within.

“The source of America’s current divisiveness is ideological, propagated by those who embrace a globalist, pluralist code that carries a vision of one world apart from God. This doctrine has permeated our media, academia, sciences, and now even our churches. It is based purely on the premise that we can bring harmony and social equality to planet earth through humanist methods and that the human intellect has progressed beyond the need for mythical belief in a metaphysical god—specifically, the Christian God, the Creator of the physical universe. This is the same lie that deceived Eve in the garden of Eden, which led to the fall of man.

“The purpose of this writing is to restore a biblical worldview that has been lost within the twenty-first-century American Christian church. As our culture crumbles around us, 350,000 churches stand by seemingly disengaged from the darkness that has engulfed our nation.

“America used to be a beacon of light for the world. This was the vision that our Founding Fathers carried with them to America, and its source was from their faith in the Christian God. So what is happening to America, and why isn’t the church having any effect upon the state of our union?

“This is a call for members of the body of Christ to reignite, reunite, and reestablish the light that can only be kindled within our individual commitment to remain in Christ; to commit an hour or so each day to be alone with our Creator in the Most Holy place—feeding, cleansing, and renewing our souls. Just you and God.

“The current grace-based doctrine of the modern Christian church has dumbed down the intricacies and treasures found within the contents of the Holy Bible to having little more significance than a bumper sticker. We read books written by other humans that tell us about the Bible; we read daily devotionals that cherry-pick scripture to make us feel good. However, few—if any of us—are actually committing to daily holy communion with God through his Word, the Holy Bible (all of it), and spending time in prayer in the name of our Savior, Jesus Christ.”

Rogers presents a thought-provoking discussion of what can happen when cultures move away from Christ.