GeriJoy won first prize out of 78 competing companies at the CorpStarter North American Venture Competition finale, which took place in New York City on August 8. GeriJoy, which provides virtual companions for eldercare, was just featured on national TV the day before, on CNBC’s Power Pitch. 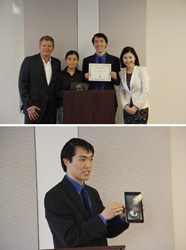 Photos from the finale of Startup World Cup North America, at which GeriJoy won first place

It’s great that such an experienced panel of judges unanimously recognizes the value of GeriJoy, not just in America, but also internationally.

CorpStarter™ Business Accelerator announced MIT startup GeriJoy as the winner of its North American Venture Competition. At the finale event on August 8 in New York, NY, an expert panel of judges awarded GeriJoy the top prize, which includes exclusive investment and business opportunities, and entry to the international stage of the competition. GeriJoy provides virtual companions for the elderly, and has received national acclaim from organizations like AARP, TEDMED, the US Senate, and CNBC.

GeriJoy Founder & CEO Victor Wang stated to the press, “I’m honored to accept this award on behalf of the GeriJoy team. It’s great that such an experienced panel of judges unanimously recognizes the value of GeriJoy, not just in America, but also internationally.”

GeriJoy’s recent success is being covered by a variety of Chinese news agencies, including Xinhua News Agency, the largest in China. GeriJoy has previously garnered interest from both government and corporate stakeholders in China, and was invited as an honored delegate at the Beijing International Technology Transfer Congress in April. Due to both demand from Chinese-speaking customers in the United States and also the size of the international senior care market in China, GeriJoy has expressed its intent to offer a Mandarin-speaking version of its virtual companion for the elderly.

The competition ended with a networking cruise gala on the Hudson River.

GeriJoy Inc. was founded by MIT researchers Victor Wang and Shuo Deng to improve quality of life for seniors and their families through friendly technology. The GeriJoy Companion, their flagship service, is a virtual pet that is backed by GeriJoy’s worldwide team of 24/7 care staff. The staff guides the pet’s speech to provide elders with the experience of having an always-available conversational companion that can talk with them about family photos and other information from the Internet. Essentially, the GeriJoy Companion is a talking dog or cat that serves as a helpful family member, not only improving mental health for elders but also providing peace of mind for caregivers. GeriJoy has been recognized by organizations like AARP, TEDMED, and the US Senate as a leading innovator in senior care. The company is based in Cambridge, MA, and is backed by investors such as Blueprint Health and Esther Dyson. To find out more, or to order GeriJoy’s service for your own family, please visit http://www.GeriJoy.com or email info(at)GeriJoy(dot)com.

CorpStarter™ is a New York based accelerator for growing companies, with an open application process, taking in earlier stage companies consisting of small teams, supporting them with funding, mentoring, training and office space. As a truly differentiated accelerator, CorpStarter™ collaborates with China’s innovation industry parks to host an annual national competition in the United States to handpick the most qualified entrepreneurs.

Testimonial of GeriJoy user Jonathan WangThis audio clip is a customer's testimonial of his experience with the GeriJoy Companion. In summary: "I believe that GeriJoy is just simply wonderful. It just brought great smiles to [my grandmother's] face. We couldn't be any happier to have our grandma

GeriJoy Customer TestimonialThis audio clip is a customer's testimonial of his experience with the GeriJoy Companion. In summary: "[My mother] calls her little dog Peanut, and she talks with Peanut quite a bit. She's really opened up and she's more conversant and outgoing now. Peanu