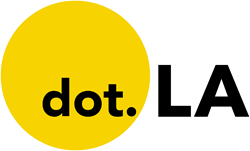 It’s finally prime time for the L.A. tech scene, after many years of steady growth, and dot.LA is here to chronicle and report on what is going to be an explosive decade for L.A. tech. - Founder Spencer Rascoff

dot.LA, the soon-to-be-launched news and events company dedicated to covering L.A.’s startup and tech ecosystem, today announced it has closed its $4 million seed round from dozens of top L.A. investors. Zillow and Hotwire Co-Founder Spencer Rascoff is serving as executive chairman and co-founder.

Investors include prominent companies and individuals from the Los Angeles tech scene, including:

“It’s finally prime time for the L.A. tech scene, after many years of steady growth, and dot.LA is here to chronicle and report on what is going to be an explosive decade for L.A. tech,” Rascoff said. “Los Angeles has so many ingredients that make a successful tech ecosystem: a culture of innovation and entrepreneurialism, world-class universities, many angel investors, venture capitalists, and startup mentors. One of the only missing ingredients was journalism to highlight the incredible startups and tech companies changing the world. Now with dot.LA on the scene, Los Angeles will be able to achieve its full potential.”

Rascoff continued: “The Los Angeles startup culture is special and unique. The environment here is creative and collaborative, and also rightly concerned with creating a foundational focus on diversity and inclusiveness. Los Angeles is a global, diverse city, and there is a recognition among the tech community here that if we establish the right cultural foundation at the beginning of this decade of growth, those who work in tech in L.A. -- and those around the world who use the products and services invented here -- will be better for it.”

“We have assembled a team of world-class journalists who are already digging into every aspect of L.A.’s startup ecosystem,” said Bel Bruno, dot.LA’s editor-in-chief. “We are all excited to leverage those years of experience covering business, entertainment and technology to provide hard-hitting, timely news coverage that will shine a light on this fast-moving scene. We’ll cover new companies, funding rounds and the unique intersection of industries that make L.A.’s startups so interesting.”

About dot.LA
dot.LA’s mission is to celebrate and empower the Los Angeles startup and tech community, fueling innovation around the world. Launching in 2020 and co-founded by tech veteran Spencer Rascoff, its newsroom will report news about new companies, funding rounds and other aspects of the startup ecosystem. The company will also host events dedicated to bringing together the startup community.