Startup of the Year® Summit 2021 Heads to Tampa in January

Established® (power behind Startup of the Year), in collaboration with host partner, Embarc Collective, and support of title sponsor, ReliaQuest, announced today that the 9th Annual Startup of the Year Summit will take place in the innovation hub of Tampa, FL from January 25 - 27, 2022. 100 early-stage startups will connect with investors, corporate innovators, and experts to grow their businesses, cultivate connections, and to compete for the 2021 championship Startup of the Year title. 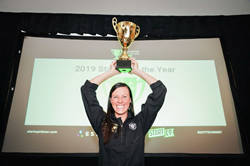 Veteran and Female Founder Wins 2019 Startup of the Year Award

“By bringing the Startup of the Year Summit to Tampa, we have opportunity to showcase the growing traction of Tampa Bay’s tech community to the most promising startup ventures and early-stage investors from around the country,” says Lakshmi Shenoy, CEO of Embarc Collective.

In its ninth year, Startup of the Year Summit celebrates and recognizes the achievements of early-stage entrepreneurs from all verticals, across the United States and internationally.

The event emphasizes inclusivity and connection, providing programming and opportunity for both emerging and established startups, investors, corporate innovators, government agencies, and ecosystem builders to cultivate relationships, leverage one another, and ultimately, grow their businesses.

Startup of the Year is a community, a resource, and competition that culminates each year at Summit. This year, 100 startups changing their industries will pitch, engage with investors and mentors, and expand their global recognition from the innovation center of Tampa, FL. The companies will compete for up to $50K in potential investment, the championship title, the People’s Choice Award presented by ReliaQuest, and more.

“By bringing the Startup of the Year Summit to Tampa, we have opportunity to showcase the growing traction of Tampa Bay’s tech community to the most promising startup ventures and early-stage investors from around the country,” says Lakshmi Shenoy, CEO of Embarc Collective, which just surpassed 100 member companies, making it the fastest growing startup hub in Florida.

“Every year, over the past six years, I’ve found myself in Tampa for a startup event. Tampa is a city that is structuring its growth for its thriving innovation economy. We are thrilled to partner with Embarc Collective as we return to gather again with an incredible group of rising companies, early-stage investors, and thought leaders,” commented Frank Gruber, Co-CEO of Established. “We’re especially excited to bring people back together after the pandemic and two years of hosting only online events and programs.”

Startup of the Year Summit complements the other startup-focused conferences that are highlighting Tampa, Florida in early 2022, including Synapse Summit and the Florida Venture Capital Conference.