“Heroes of the Old Testament: Joseph, Daniel, and Captain Naaman” from Christian Faith Publishing author Stephen Weesner is an engaging illustrated volume for children that focuses on three Bible stories, their heroes, and their faith-based moral lessons. 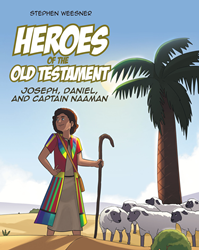 “Heroes of the Old Testament: Joseph, Daniel, and Captain Naaman”: a Christian family delight, is the creation of published author Stephen Weesner, a father, longtime poet, and retired radiological technologist. He lives in Highgrove, California, with his family.

Weesner writes, “Being a parent is lots of fun, despite the many responsibilities we are all familiar with. To teach our children right and wrong is paramount among those responsibilities. Quiet time before bed is understandably just about the best time to read stories, hopefully with a moral lesson, illustrating the moral character we all want to pass on to our children. This book contains three Bible stories in poetic form which may help hold the attention of the children and possibly entertain the parent as well.

“First is the story of Daniel, who faced peril which should have led to his death. He had an opportunity to bend on his principles but chose instead to hold fast and face the danger which was before him. Having shown sincere faith and devotion, God revealed His power through Daniel, which had great influence in changing the heart of the king.

“Then there is the story of Captain Naaman, who, having been influenced by a little girl, took her advice, which not only saved his life but, in turn, shifted the mood of an empire.

"And there was Joseph, who was sold into slavery as a child and, against all odds, rose to fame, becoming the governor of Egypt, and through his leadership, saved millions of lives.

“My children always liked the stories I read to them that rhymed, so writing with a bit of inspiration, I wrote these stories poetically. My hope is that they will inspire your children as they did mine.”

Published by Christian Faith Publishing, Stephen Weesner’s new book is an absorbing opportunity for the family to delve into the timeless tales in God’s Word and reflect on what it means to be a Christian facing similar challenges today.

View a synopsis of “Heroes of the Old Testament: Joseph, Daniel, and Captain Naaman” on YouTube.

Consumers can purchase “Heroes of the Old Testament: Joseph, Daniel, and Captain Naaman” at traditional brick & mortar bookstores, or online at Amazon.com, Apple iTunes store, or Barnes and Noble.

For additional information or inquiries about “Heroes of the Old Testament: Joseph, Daniel, and Captain Naaman”, contact the Christian Faith Publishing media department at 866-554-0919.