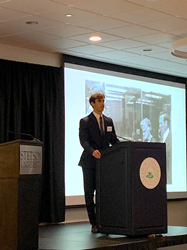 “The public trustee event is a great opportunity to showcase the RGIP students’ hard work, professionalism, and knowledge.”

The night was kicked off by Luca Zambelli, RGIP student portfolio manager, who oversees approval for all presentations and trades, and is responsible for managing the trustee voting process.

Recognizing that Florida is a fast-growing market with a favorable tax environment for businesses, the meeting focused on stocks in the Florida tourism, energy and industrial/defense industries or companies with ties to Stetson University. The five stocks that were presented include L3 Harris, Marriott Vacations Worldwide, The Walt Disney Company, Spectrum Brands and Top Build.

After months spent researching, vetting, and analyzing, the stocks were presented to a crowd of approximately 150 attendees including a board comprising four student trustees and three faculty/public trustees.

“The public trustee event is a great opportunity to showcase the RGIP students’ hard work, professionalism, and knowledge,” said Matt Hurst, PhD, CFA, interim director of the Roland and Sarah George Investments Institute. “It’s also an opportunity for the public to pick up a tip or two. They can capitalize on the meticulous research and deep-dives into company fundamentals that has kept the student busy for months.”

A debate of the bull and bear sides of NextEra Energy, moderated by Zechariah Levesque, was held between Jimmy Dean and Chris DeGance. Dean’s position was that NextEra’s cost efficiency and service reliability allows them to control costs while DeGance’s stance was that NextEra Energy’s price is overinflated relative to its fundamentals, historical averages, and peers. RGIP will be waiting to decide on this stock until after the students finalize their recommendation for the upcoming Chartered Financial Analyst Institute’s student research challenge.

Finn Busmann and Raphael Northoff presented L3 Harris which provides technology-based solutions that solve government and commercial customers' mission-critical challenges. Busmann presented the company’s unique dual business model which allows them to capture market share of both government-funded and commercial contracts as a core tenant of the investment rational. Furthermore, he stated that the stock is undervalued by 13 to 20 percent.

Next, Tiffany Cranston and Alyssa Tripodi teamed up to present Spectrum Brand, a leading supplier of consumer batteries, residential locksets, specialty pet supplies, lawn and garden products, and pest control products. They weighed the risks, such as slowing revenue growth, against capital acceleration drivers and ultimately suggested a buy due to wise investments and projected undervaluation by 58 percent.

Top Build, an installer and distributor of insulation products and other building products, was recommended by Quintin Burkhamer for its strong revenues, sustainable growth, and being the leader in the insulation and distribution industry.

A series of clips from top Disney films kicked off Camilia Morales presentation of The Walt Disney Company. Her primary premise for the stock buy was tied to Disney’s own streaming channel, DisneyPlus, which has a unique content library and bundling with Hulu and ESPN combined with a low price. Additionally, she stated that the theme park growth and some highly anticipated Disney films will deliver future profits.

The last presentation of the evening was delivered by Thiri Yadana with a buy recommendation for Marriot Vacations Worldwide, the world's leading luxury vacation ownership property and timeshare company. She addressed the biggest concern of most investors which is recession and the cyclical natures of the industry. She argued that the company will generate enough revenue with its flexible and resilient business model in the face of a mild recession.

Following the presentations, Zambelli asked the audience to text their opinion for which of the four companies RGIP should invest in. With a resounding 53 percent of the vote Top Build was the obvious audience favorite with Disney coming in second with 23 percent of the vote.

Independent of the audience vote, the RGIP Board voted on four of the stock recommendations to determine which ones they deemed worthy investments. In total, nearly $130,000 was approved from the RGIP Growth Fund for investment in Top Build and The Walt Disney Company.

The purpose of this semi-annual meeting is to help the Roland George Institute achieve its goal of providing financial education to the public while also giving RGIP students an opportunity to manage a real portfolio comprising $3.8 million in stocks and bonds. Using fundamental research tools and data services such as Bloomberg, Reuters, Morningstar and Baseline, students find and defend investment recommendations to the investments committee. This year, the students were able to take advantage of the program’s 12 new, state-of-the-art Bloomberg terminals to research and vett their stocks leading up to the event. Since 2001, based on the actual portfolio performances, RGIP students have won 16 championships and six second-place wins in the national R.I.S.E. (Redefining Investment Strategy Education) and G.A.M.E. (Global Asset Management Education) competitions.

To watch a recording of the event, https://youtu.be/xRWx6dRRxdU.

Disclaimer: The Roland George Investments Program, and students affiliated with the program, are not Registered Investment Advisors. As a result, any information contained herein or presented at an RGIP event should not be construed as investment advice.

About Stetson University
Founded in 1883, Stetson University is the oldest private university in Central Florida. Stetson focuses on intense learning experiences in a supportive community that allows students to develop their voice in a connected, inclusive environment. Stetson University ranks No. 5 on U.S. News & World Report’s 2019 list of Best Regional Universities (South), and has been recognized as one of The Princeton Review’s 384 Best Colleges, 2019 edition. Stay connected with Stetson on social media.
###