Legendary businessman and chairman of Forbes, Inc. suggests the dollar should be fixed to the price of gold, which "maintains its intrinsic value better than anything else on Earth." 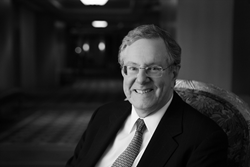 Steve Forbes explains how the "sinning" Fed is "undermining the dollar".

Gold maintains its intrinsic value better than anything else on Earth, and that's for 4,000 years.

Steve Forbes, Chairman of Forbes, Inc. and one of the most prominent figures in American publishing, sees gold as a clear, viable solution to the disastrous economic conditions created by former Federal Reserve Chair Ben Bernanke and exacerbated by current Chair Janet Yellen.

In an exclusive interview with Birch Gold Group, Forbes says the Fed's monetary policies over the past decade have wreaked havoc on the U.S. economy and the dollar.

"Bernanke was a disaster," Forbes tells Birch Gold Group, a leading dealer of precious metals in the United States. "He put in Quantitative Easing. He suppressed interest rates across the board, which has totally mucked up the credit markets. He hurt the economic recovery … and before he became the head of the Fed, he bought into weakening the dollar and bought into the idea that there are excess savings around the world. So he's got a pretty bad record."

A known advocate of owning gold as an insurance policy against bad economic policies, Forbes sees further trouble ahead for the dollar as the Fed plans to end its controversial program of Quantitative Easing – a strategy in which the government has purchased bonds and kept interest rates low as a means of stimulation the economy.

"The Fed will stop the Quantitative Easing, but what is disturbing is that they are going to still keep all the bonds that they bought … which is now going to be about four and a half trillion dollars," Forbes says. "So the Fed is still sinning, and those excess reserves are still an overhang and they're still working to undermine the dollar, openly. … The overhang is so huge, it's unprecedented … and they just have to hope that the flood doesn't sweep away the town."

The solution, Forbes says, lies in the stability of gold.

"Gold maintains its intrinsic value better than anything else on Earth, and that's for 4,000 years," says Forbes. "And when you see the dollar price fluctuate around gold, that means the dollar is either weakening or peoples' perceptions about the dollar are changing."

Forbes says the floundering dollar would be much better off if American monetary policies were more closely tied to gold – a strategy he says worked well in the United States for roughly 180 years. By creating this new "gold standard," the Fed would no longer need to print money in times of economic instability. Stability would be created by fixing the dollar to the value of gold, he says.

Such a gold standard is very simple to put in place, Forbes says, but "that's what the high priests of funny money don't want you to know." With the gold standard in place, "you wouldn't need the insurance," he says, but these policies will likely never see the light of day. And until they do, he's holding onto his gold.

"The economics profession knows less about money than it did a hundred years ago," says Forbes. "And they and others have a vested interest in currency instability."

The full audio and transcript of Birch Gold Group's exclusive interview with Steve Forbes can be found at on the Birch Gold website: http://www.birchgold.com/steve-forbes-interview-dollar-gold-standard

To learn more about Birch Gold Group and how to invest in precious metals, call them at (800) 355-2116 or visit http://www.birchgold.com.

About Birch Gold Group
As a leading dealer of physical gold and silver in the United States, Birch Gold Group has helped thousands of Americans safeguard their savings from the countless instabilities in the market, such as the dollar's ongoing loss in value, stock market volatility and geopolitical unrest. One of the company's areas of expertise is in moving existing IRA's or 401(k)'s into Gold & Silver IRA's; it's how the AAA-rated business has come to be known as the Precious Metal IRA Specialists. Throughout its years of dedicated service, Birch Gold Group has earned an A+ Rating from the Better Business Bureau (BBB) and 5-star ratings from several services, including Trustlink.org and Certified Consumer Reviews.

About Steve Forbes
Steve Forbes is Chairman and Editor-in-Chief of Forbes Media, whose flagship publication, Forbes, is the nation’s leading business magazine, with a circulation of more than 900,000. A widely respected economic prognosticator, Forbes has authored four books and also contributes an editorial titled "Fact and Comment" to each issue of Forbes magazine.