“Unprepared!: The Unsealing of the Book of Revelation” from Christian Faith Publishing author Steven E. Gardner is a brilliant read that equips man of the Coming of Christ as it chronicles the time frame of events and presents ways for one to survive as the rapture takes place. 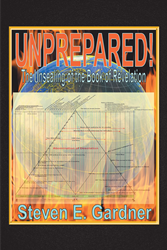 Gardner shares, “Humanity is about to enter what the Bible calls ‘the time of the end,’ the seventieth week of Daniel, otherwise known as the Revelation of Jesus Christ.

“This book, undergirded and based upon biblical prophecy presents the time frame, the chronology of events, and the solution you must choose if you want to survive until the rapture.

“By May 2033, the end of this age will have come. The church will be gone from the earth. The climate will be altered into a new system without the sun. Civilization will have ceased to exist. In fact, only a remnant of Israel will survive to populate the earth going into the Millennium. Mankind is going to be exterminated from off the surface of the earth by judgments of hail, fire, famine, pestilence, plagues, war, heat, economic collapse, and finally an earthquake so powerful that every city in the world will be destroyed, and the mountains and islands are going to disappear! The only thing that will remain is darkness.

“This is the prophecy of the end. Get ready; it is coming.”

Published by Christian Faith Publishing, Steven E. Gardner’s new book is a great guide for every human to clearly see and understand the prophecy of the world’s end, so as to be equipped and illuminated of how to attain survival in His Kingdom.

Hence, this work is a key to prepare the unprepared.

View a synopsis of “Unprepared!: The Unsealing of the Book of Revelation” on YouTube.

Consumers can purchase “Unprepared!: The Unsealing of the Book of Revelation” at traditional brick & mortar bookstores, or online at Amazon.com, Apple iTunes store, or Barnes and Noble.

For additional information or inquiries about “Unprepared!: The Unsealing of the Book of Revelation,” contact the Christian Faith Publishing media department at 866-554-0919.