Stimulus Phase 4 – After surviving 4 floods, a fire, and a hurricane Congress needs to talk to this small family business about what is needed in the next package

Bobby and Janice Jucker, co-owners of Three Brothers Bakery in Houston, TX, call themselves the King and Queen of Disasters. While they are thrilled with the C.A.R.E.S. Act, there is more needed. They want to see 6 additional pieces added in Stimulus Bill #4 and offer a warning of what is to come as small businesses try to recover. 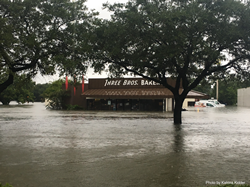 The owners of Three Brothers Bakery are experts at small business disaster recovery proven by reopening after 4 floods, a fire and a hurricane.

“Disaster areas are financially devastated and require revenue from outside their area, but the problem with this disaster is that the entire world is a disaster zone,” said Janice Jucker, co-owner Three Brothers Bakery

The Juckers say it is official that they are the King and Queen of Disasters, having won national recognition from the Small Business Administration (SBA) with the Phoenix Award for Small Business Disaster Recovery in 2018 - earned because of coming back from Hurricane Harvey. “It is an award for which you never want to qualify,” said Janice Jucker. But after going through so many disasters as a small business, the Juckers know what needs to be included in the next stimulus bill.

And they also warn insurance premiums could be dropped when monies are tight.

In the C.A.R.E.S. Act debt forgiveness was given to businesses owing on SBA 504 and 7a loans. The federal government is paying all principal and interest payments for 6 months. “While we are happy for the small businesses that are getting the extra grant, we feel the same should be given to the businesses still struggling to recover from previous disasters. Those businesses took the 504 and 7a loans for growth; while we took our disaster loans to survive. So why wouldn’t the government also help previous disaster burdened businesses?” said Janice Jucker.

While, conceptually, the small business is reimbursed through tax credits for mandated time off, many small businesses with less than 100 employees will not have the money. The law also states if you get the PPP loan, you cannot apply for the tax credit, so the Juckers are wondering where will the money come from outside of the 8 week period? The law also mandates that only businesses where revenues dipped 50% or more can use the credit , and the Juckers ask why? A 20% reduction can also cause big losses. Additionally, if people are required to stay home and be paid, the small business most likely will have to pay people overtime to backfill the jobs of the absent employee. The overtime is another added burden which needs to be considered and the Juckers suggest amending the law so businesses could apply for a tax credit for the overtime dollars spent.

“The government can legislate all they want, but if the cash is not in the bank, the people cannot be paid,” said Janice Jucker.

The PPP loan can be used for 8 weeks of payroll, rent/mortgage interest and utilities. Many businesses are already having to pay the two weeks of paid time off and FMLA, but because they are looking at loan forgiveness through the PPP loan, they are not eligible for the Employee Retention Tax Credit. The Juckers suggest the law could be amended to allow for both, just not at the same time.

The Juckers always experience a slow rise of revenue after a small business disaster. They explained it takes them about 18 months to see any real difference. Full recovery can take 3, 5, or 8 years. “Disaster areas are financially devastated and require revenue from outside their area, but the problem with this disaster is that the entire world is a disaster zone,” said Jucker.

For PPP loan forgiveness there are thresholds to meet, which includes year over year employment. The Juckers think the previous period would be more relevant. You could have hired seasonal help in 2019 to get you through Easter, Passover and Mother's Day and those people moved on after the season.

Jucker feels eight months will not be enough to save small margin businesses, ie., restaurants, bars, retail, and analyzing them for loan forgiveness after eight weeks, when many may still not be open, would be counterproductive.

Lower the interest rate for the EIDL loan

One more problem to be considered – insurance

Small businesses try to cut big expenses when times are tough. Insurance is usually a big line item and falls victim to the cuts. “On March 13, 2020, we had to pay our flood insurance in one lump sum. It was $25,000,” said Jucker. Choosing to cut insurance is a problem coming down the pipe. ‘We’re getting ready to move into the season of natural disasters, and if the government generously gives small businesses money to keep them going, and then the small business cuts their insurance, when the next natural disaster strikes, - fire, flood, hurricane, tornado, earthquake or other- and the business does not have the coverage, they will close their doors for good. Just something to think about,” ended Jucker.