This select group of global personalities, representing the best of their regions, from the United Kingdom, the United States, Spain, Italy, Venezuela, Colombia, and more, will be part of the inspiring event that will honor some of today’s most outstanding changemakers and peacebuilders 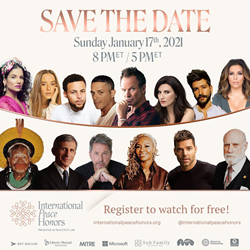 I am very humbled to be a part of the International Peace Honors presented by PeaceTech Lab and personally present this award to someone as close to me as Raoni, who empowers me and many others to care for our 'green lung' and fight for the progress of indigenous cultures.

A select group of international personalities will join the inaugural International Peace Honors, presented by PeaceTech Lab, which will celebrate the most prominent world leaders and change-agents of our time, whose common goal is to build a more just and equitable future. With much of our world undergoing natural, political, and social upheaval, we are also witnessing unprecedented movements of social change, as leaders from many disciplines work to advance humanity and our planet. On January 17th, the International Peace Honors will recognize some of these leaders, who have helped tackle the biggest challenges of 2020 and inspire hope for a brighter future.

This year's honorees, two of which are recognized on TIME’S 2020 list of the 100 Most Influential People, include: Dr. Anthony Fauci, Director of the National Institute of Allergy and Infectious Diseases; Amazonian Chief Raoni, leader of the Kayapó people in Brazil; Opal Tometi, co-founder of Black Lives Matter; singer-songwriter and activist Ricky Martin; the “Father of the Internet,” Vint Cerf; and prominent Venezuelan singer-songwriter and humanitarian Ricardo Montaner, who will be named Ambassador of Peace, for his continued support of the PeaceTech Lab mission.

World-renowned musician and environmentalist, Sting, will also partake through a special musical performance and by presenting an award to the Amazon leader Raoni Metuktire, with whom he shares a close friendship forged through the shared purpose of protecting the Amazon and its indigenous cultures, a mission which led Sting & his wife, Trudie Styler to create The Rainforest Fund more than 30 years ago.

“I am very humbled to be a part of the International Peace Honors presented by PeaceTech Lab and personally present this award to someone as close to me as Raoni, who empowers me and many others to care for our 'green lung' and fight for the progress of indigenous cultures. Through his incredible courage, wisdom and dedication, Raoni is a shining example of how we can all adapt our lives to work more deliberately for peace,” said Sting.

Basketball icon Stephen Curry of the Golden State Warriors also joins the International Peace Honors to present the medal of honor to Dr. Anthony Fauci. After hosting two, very special one-on-one conversations during the pandemic to Curry’s nearly 46 million combined social media followers, Dr. Fauci and Stephen Curry have a shared commitment to empowering the broader public through awareness and education. As one of the most influential stars both on and off the court, Curry holds six NBA All-Star selections, three NBA Championships, and is also an emerging figure in Silicon Valley, investing in innovative consumer and enterprise tech companies. In 2019, Stephen and his wife, Ayesha Curry, launched Eat. Learn. Play., their foundation whose mission is to unlock the potential of every child by ending childhood hunger, ensuring universal access to education, and empowering all children to play and be active.

Industry staple Eva Longoria will make a special appearance during the International Peace Honors to present an award to her friend Ricky Martin. Since her starring role in the hit ABC series Desperate Housewives, Longoria, an award-winning actress, director, producer, entrepreneur, philanthropist and activist, has become a leader in the fight for more diverse and equitable representation both on and behind the camera. Recently named by People Magazine as one of the Women Changing the World, Longoria is a dedicated social activist who consistently lends her voice to issues she is passionate about, ranging from immigration to STEM education. Committed to empowering Latinas everywhere, Longoria established the Eva Longoria Foundation (ELF) in 2012 to help Latinas build better futures for themselves and their families through educational programs, scholarships, mentorship, and entrepreneurship.

Also gracing the awards ceremony is Laura Pausini, who will perform "Io Si," the theme song for The Life Ahead, available on Netflix, with music by Diane Warren (eleven-time Oscar® nominee and winner of the GRAMMY®, Emmy® and Golden Globe Awards®) and lyrics by Diane Warren, Laura Pausini and Niccolo Agliardi. The film, starring Sofía Loren, has marked a milestone in the career of the Italian diva, with a powerful message of acceptance, tolerance, and diversity, which is so necessary at this time.

“It is a profound honor to join PeaceTech Lab’s International Peace Honors, which represents the values and ideals that have guided my life and career. It is also deeply rewarding to be able to interpret this song alongside one of my country's –and the world's– greatest icons, Sofia Loren, with a precious message that invites us to unite and accompany each other in our differences as we move forward together,” says Pausini.

The event will also include one of the most influential young couples of the moment, singers/composers Camilo and Evaluna, who together have more than 30 million followers on their social networks. Latin Grammy Award Winner Camilo recently received six GRAMMY® nominations for his debut album “Por Primera Vez,” which has generated hit after hit including “Favorite,” “Tutu,” “Vida de Rico,” and his wife, Evaluna, is a multi-talented actress star of three Nickelodeon TV series, singer and director whose career is on the rise.

One of the most influential Latin music icons and Spanish artist with the highest number of GRAMMY® awards in history, Alejandro Sanz, will also perform during the event. With more than 25 million records sold, Sanz has more than 31 million followers on his social networks, and his influence builds bridges between Spain, America, and the rest of the world.

“It is heartwarming to be part of this inspiring event where the notion of unity and togetherness prevails. I am a faithful defender of peace and always trust that my voice, my music, and my whole being can be an example to overcome challenges and counteract conflicts. I want to be able to transmit with all the means at my disposal, the love and unity that we need so much,” said Sanz.

This inspiring global experience will be hosted by one of the most relevant figures in Latin music, singer and songwriter Natalia Jiménez. Jiménez is an internationally renowned GRAMMY and Latin GRAMMY winner artist, who has sold over 3 million albums worldwide and recorded duets with Latin music’s biggest stars, including Marc Anthony, Daddy Yankee, and Ricky Martin to name a few. Her TV personality has also granted her important roles inside hit shows like La Voz Mexico, La Voz Kids USA, Latin Billboards, among others. Jiménez is a committed partner of St. Jude Children's Research Hospital, as well as a supporter of multiple humanitarian causes including providing emergency relief during natural disasters, promoting social justice and equality, among other human rights issues. She is also an active advocate for the rescue of Mexican music as cultural heritage.

“It is truly humbling to have the support of these global changemakers for the inaugural International Peace Honors, an event that will unite us all in our commitment to contemporary peacebuilding. We must be intentional with our use of media, data, and technology as devices for building peace and mitigating violence, and this event will celebrate some of the amazing leaders who are living this mission every day. I'm so thankful for their support and can’t wait to kick off 2021 together on a note of hope and positive change,” reiterated Sheldon Himelfarb, President and CEO of PeaceTech Lab.

The International Peace Honors will broadcast digitally on Sunday, January 17 at 8:00 pm EST., To register to watch the event for free, visit: internationalpeacehonors.org

The International Peace Honors are made possible with the generosity of its sponsors and donors: BNY Mellon, The MITRE Corporation, Microsoft, Channels TV, Suh Family Foundation, Liberty Mutual Insurance, Mercator XXI, and Alliance for Peacebuilding.

About PeaceTech Lab:
Established by the United States Institute of Peace, PeaceTech Lab is committed to using technology, media, and data to prevent violence and build prosperous and peaceful communities around the world. For more information: http://www.peacetechlab.org