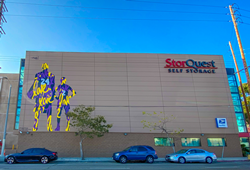 StorQuest Self Storage proudly unveils a new mural painted in partnership with Los Angeles street artist, Ruben Rojas and Beautify Earth, honoring the late NBA legend Kobe Bryant and his daughter Gianna Bryant. The mural is a 3-story-tall silhouette of the father and daughter located on the eastern wall of StorQuest Self Storage at 3707 S. Hill St.

Bryant personified StorQuest’s “work hard, play hard” mentality as a NBA superstar while being a dedicated father and husband to his four daughters and wife, Vanessa Bryant. He is an inspiration to many, as well as the StorQuest team. “At StorQuest, we motivate our guests to live their best life by making room for all the things they love doing. Kobe was a true embodiment of what it means to put aside your excuses and champion a truly awesome existence,” says Michelle Bakva, Vice President of Marketing & Sales at StorQuest.

Ruben Rojas, a well-known muralist and street artist in Los Angeles aims to inspire others to live through his ‘love’ signature. The word ‘love’ is repeatedly written inside the silhouettes to represent the outpour of adoration the world has for Bryant and his family. “Let’s remember Kobe Bryant’s legacy not just on the court but beyond it, his impact on the world, the example of fatherhood and giving more than anyone will ever know,” remarks Rojas. “Here’s to embracing our self-doubts, chasing our own greatness, becoming the best versions of ourselves and living life to the fullest.”

No matter what, no matter where, the father-daughter duo will always have a home in Downtown Los Angeles, where he led the team to seven NBA finals, and earned five championships in his 20 seasons.

StorQuest Self Storage, owned by The William Warren Group, Inc., owns and operates a thriving network of modern, innovative self storage properties across the United States. Headquartered just steps from the Pacific Ocean in Santa Monica, California, StorQuest is focused on delivering the highest-quality storage solutions backed by the best service in the industry, at an affordable price for all customers.

Ruben works with companies to help businesses give back, enhance workspaces and raise awareness on important issues. Past campaigns include clients such as Toms, Reebok, American Express, & GT’s Kombucha. Ruben is also co-founder of Beautify Earth, a nonprofit dedicated to putting an end to blighted walls and fixtures all over the world by empowering artists, encouraging social responsibility, and instilling community pride.