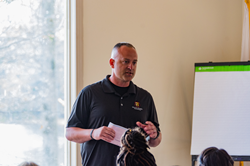 Ben Alexander, whose engagement with TMF has helped him overcome the struggles of transition and find purpose through youth mentorship.

"I felt like I was abandoned. Without [TMF], I don’t know where I would be or what I would be doing."

In partnership Syracuse University's Institute of Veterans and Military Families (IVMF), Travis Manion Foundation (TMF) conducted their second annual study, which used a 10-question Brief Inventory of Thriving (BIT) scale and questions about health, resilience, and community connectedness, to quantify the impact of its programs.

IVMF researchers found that the more engaged with TMF initiatives that participants were, the more they experienced physical and mental health outcomes. The study also found veterans who continue their service after the military as Mentors in TMF’s youth character development program, experienced especially positive outcomes to their overall well-being and mental health.

While the study’s primary finding showed that veterans who participated in Travis Manion Foundation initiatives more frequently, experienced higher overall mental and emotional well-being, this was equally true for civilian members as well.

TMF’s programs are grounded in the field of Positive Psychology, which studies the attributes and characteristics that lead individuals and communities to improve their well-being and thrive. Three areas that enable individuals and communities to thrive are meaning, relationships, and engagement. Thriving and well-being improves when people are able to identify what gives their lives meaning and purpose; develop and deepen relationships; and fully engage in activities in an effort to capture and communicate impact.

For over a decade, Travis Manion Foundation has been providing best-in-class programs to families of the fallen and veterans, calling upon their strength of character and selfless service to lead our communities and inspire our youth. IVMF surveyed TMF Spartan Members from across the country and found something incredible: greater engagement with TMF across initiatives correlates to higher levels of mental health and emotional well-being.

One survey respondent wrote, “TMF has helped me look at hardship or suffering in a different light. None of the problems I have seem so big when I consider the stories of heroes such as Travis and the families that those heroes leave behind. TMF has made me more resilient.”

You can read the executive summary, and see video testimonial from a Veteran Mentor, Ben Alexander, whose engagement with TMF has helped him overcome the struggles of transition and find purpose through youth mentorship. Ben is a Veteran Mentor for TMF’s youth character development program in Mesa, Arizona, who struggled to return to civilian life after 8 years in the Marine Corps. “I felt like I was abandoned,” he says of the few tools available for transitioning military members.

But through engaging with TMF initiatives, especially mentoring young adults, Ben has found purpose and meaning, is developing meaningful relationships, and is engaging in activities that matter to him, like youth development and service—and in the process, overcoming the Post-Traumatic Stress that has followed him.

“Without [TMF], I don’t know where I would be or what I would be doing.”

About Travis Manion Foundation
Travis Manion Foundation (TMF) unites communities to strengthen America's national character by empowering veterans and families of fallen heroes to develop and lead future generations. In 2007, 1st Lt. Travis Manion (USMC) was killed in Iraq while saving his wounded teammates. Today, Travis' legacy lives on in the words he spoke before leaving for his final deployment, "If Not Me, Then Who..." Guided by this mantra, veterans continue their service, develop strong relationships with their communities, and thrive in their post-military lives by serving as character role models to youth. As a result, communities prosper and the character of our nation’s heroes lives on in the next generation.

The story of 1stLt Travis Manion and his Naval Academy brother Lt. (SEAL) Brendan Looney have been publicized in the book Brothers Forever, and additional information about the Foundation can be found at http://www.travismanion.org.

About the Institute for Veterans and Military Families at Syracuse University (IVMF)
The IVMF is higher education’s first interdisciplinary academic institute, singularly focused on advancing the lives of the nation’s military veterans and their families.

Who we serve: Individuals, organizations, and communities
What we do: Program development & delivery, services and research, policy & evaluation
How we do it: As an innovative, high performing, efficient and effective organization