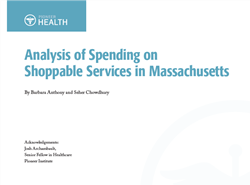 Consumers in just one Massachusetts county could have saved nearly $22 million in a single year and $116.6 million adjusted for inflation over four years if they switched from using the most expensive providers for 16 shoppable healthcare services to those whose prices were closer to average, according to a new study published by Pioneer Institute.

“With patient navigators and financial incentives from their insurance carriers to utilize lower cost providers, and support from administrative staff at physicians’ offices to help them find alternative providers and resources, consumers can alter their behavior,” said Barbara Anthony, who authored “Analysis of Spending on Shoppable Services in Massachusetts” with Seher Chowdhury.

The study looked at spending on 16 shoppable services (those that, unlike emergency care, allow consumers to shop for value) in Suffolk County during fiscal 2015. It calculated the savings that would be achieved by shifting from providers whose prices were in the top 20 percent to those with prices between the 40th and 80th percentile. Suffolk County consists of Boston, Chelsea, Revere and Winthrop.

Healthcare prices vary widely across Massachusetts, and more expensive care doesn’t generally correlate with better quality. Healthcare is the only industry in which consumers are unaware of both the overall price and the amount coming out of their pockets for a service at the time they utilize it. Insured consumers generally know just their co-pay and deductible.

Pioneer surveys have found that three out of four consumers would be interested in incentives like cash-back programs to use lower-cost, high-quality providers. The Commonwealth’s three largest health insurers – Blue Cross Blue Shield, Harvard Pilgrim and Tufts – offer incentive programs. The authors recommend that carriers do more to promote the programs to their members.

Anthony and Chowdhury also recommend that administrative staff for primary care physicians and other doctors who make frequent referrals should be trained so they can provide patients with resources such as lists of lower-cost/high-value specialists and imaging centers to allow consumers to make price-conscious decisions that work best for them.

Finally, the authors call on the Commonwealth to use its bully pulpit to spur innovation around incentive programs and to focus on price transparency. Several Pioneer surveys have shown lax compliance by providers with a law that requires all providers, including physicians, hospitals, dentists, and clinics, to provide consumer price information within two business days upon request.

Barbara Anthony, lawyer, economist, and public policy expert, is a Senior Fellow in Healthcare Policy at the Pioneer Institute. She was also a former Senior Fellow and Associate at the Harvard Kennedy School’s Center for Business and Government where she researched and wrote about Massa­chusetts market reform and healthcare cost containment efforts. She served as Massachusetts Undersecretary of the Office of Consumer Affairs and Business Regulation from 2009 to 2015 and has worked at the intersection of federal and state commercial regulation and the business community for many years. Among other positions, Anthony served as the Director of the Northeast Regional Office of the Federal Trade Commission in Manhattan, and was a top deputy to the Massachusetts Attorney General. She began her career as an Antitrust Trial Attorney at the U.S. Justice Department in Washington, D.C. Anthony is a well-known consumer advocate and regularly appears as a media commentator on consumer protection and business regulation issues.

Seher Chowdhury graduated this Spring from the Boston University School of Public Health (BUSPH) with a Masters Degree in Public Health; her areas of specialization include Health Policy & law and Epidemiology and Biostatistics. She has been a Pioneer Research Assistant in Healthcare Policy since June 2019. She has worked extensively in the area of healthcare price transparency along with Pioneer’s Senior Fellows. She participated extensively in Pioneer’s first state poll and analysis of consumers’ attitudes toward healthcare price transparency. Outside of price transparency, her areas of interest include Medicaid reform and expan­sion; reproductive and minority health access and equity; and the intersection of health, human rights, and bioethics. Seher graduated from the University of California at Los Angeles (UCLA) in 2018 with a Bachelor of Science degree, where she completed a major in Biology and minor in Asian Languages (Korean concentration).

Mission
Pioneer Institute develops and communicates dynamic ideas that advance prosperity and a vibrant civic life in Massachusetts and beyond.

Vision
Success for Pioneer is when the citizens of our state and nation prosper and our society thrives because we enjoy world-class options in education, healthcare, transportation and economic opportunity, and when our government is limited, accountable and transparent.

Values
Pioneer believes that America is at its best when our citizenry is well-educated, committed to liberty, personal responsibility, and free enterprise, and both willing and able to test their beliefs based on facts and the free exchange of ideas.