As mobile usage continues to grow, students especially are using their cell phones for not just texting talking and social media, but for web browsing as well, meaning it's more important than ever for businesses to adapt and become mobile-friendly. Here Study Breaks, a leading college media company, presents must-know mobile statistics for 2013 and explains the importance of these numbers for businesses. 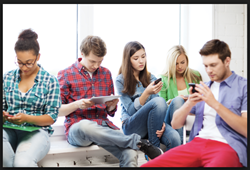 Not only are students attached to their phones for texting, talking and social media; in many cases, mobile devices are students' primary mechanism for surfing the web as well.

In a world of social media, augmented reality, and proximity marketing, students aren't just using their phones more often—they are looking towards their devices as platforms equipped for innovation.

Mobile usage has been increasing exponentially for years now, and as smartphones and tablets continue to expand in numbers, consumers are shifting their expectations while wise businesses are adapting to meet them.

Perhaps no market is more invested in their mobile devices than college students. In a world of social media, augmented reality, and proximity marketing, students aren't just using their phones more often—they are looking towards their devices as platforms equipped for innovation. And more importantly, they are turning away from businesses still stuck in a desktop state of mind, as evidenced by a recent Latitude study that reports that 61% of people have a better opinion of brands when they offer a good mobile experience.

If it's true that the medium is the message, one could argue that embracing the mobile medium signifies a business’s commitment to customer service. It's not enough anymore for business owners to link a company website or social media page with traditional media (especially if one's website isn't mobile-friendly). Today's mobile users are looking towards their devices as one-stop shops, with entertainment value equaling the value of accessing pure information. In fact, digitalbuzz reports that 80% of time on mobile devices is spent on apps. When marketers can employ third-party apps such as augmented reality to promote their message, they are simultaneously expanding the reach of their message while transforming a growing trend into a marketing strength.

Here are some 2013 mobile statistics according to marketingland.com:

Study Breaks magazine is an award-winning line of monthly entertainment magazines for college students with a mission can best be explained through its slogan: We are college life. Published by Shweiki Media Printing Company, it is distributed in five Texas cities (Austin, Houston, San Antonio, San Marcos and Lubbock). (Studybreaks.com)