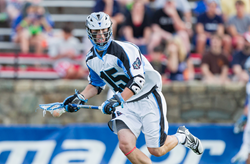 Since day one of my professional lacrosse career, STX has been there every step of the way and that commitment means a great deal to me.

Baltimore-based STX, LLC, a global sporting goods leader, today announced that it has renewed the contract of Major League Lacrosse (MLL) All-Star Peter Baum through 2016. Baum’s role will include working with the STX Research and Development team to evaluate and improve products, represent key product lines and use STX gear on and off the field.

“I couldn’t be more excited that STX has allowed me to remain a part of their family of athletes for the next two years,” said Baum. “Since day one of my professional lacrosse career, STX has been there every step of the way and that commitment means a great deal to me.”

Baum concluded a stellar first-year campaign in the MLL with the Ohio Machine. He was named to the MLL All-Star Team, MLL All-Pro Team and earned the Machine’s 2014 Breakout Player of the Year award. He finished the 2014 season as the second leading scorer for the Machine and third in the MLL with 35 goals and a total of 50 points.

“Having the opportunity to represent STX in the MLL and showcase the quality of their products on a daily basis is a great honor and something I do not take lightly. I look forward to the continued growth of our relationship and the opportunity to help grow the game with other STX athletes,” continued Baum.

A standout player at Colgate University, in 2012 Baum was the recipient of the Tewaaraton Award, college lacrosse’s most prestigious honor. A two-time All-American, he was selected as the first overall pick in the 2013 MLL Collegiate Draft by the Ohio Machine. Baum also appeared with Team USA in the Seatown Classic in October, where he scored two goals in a 17-14 victory over Notre Dame.

“We are very excited for Peter to continue his career with STX and are extremely proud that he has chosen to use and wear our gear. After earning a number of significant honors in his first year, it’s clear that he is one of the best lacrosse players in the MLL,” said Greg Tate, Men’s Marketing Manager at STX. “His commitment to our brand shows that STX products continue to be the most sought-after equipment by elite athletes.”

To check out STX’s latest gear, including the new STX Stallion 500 helmet by Schutt, visit http://www.stx.com.

About STX:
STX is a global sporting goods leader in the sports of lacrosse, field hockey and golf. With its 1970 introduction of the first synthetic lacrosse head, STX ushered in the “modern era” of what is now the fastest growing team sport. Based in Baltimore, the home of lacrosse, STX has been universally recognized for innovation in product design and development. STX continues to strive for new performance standards in sporting goods equipment at the highest levels of competition. For more information, visit http://www.stx.com.