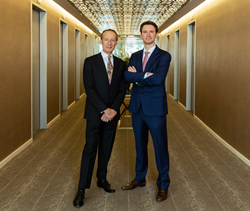 Between the compensatory and punitive damages the jury provided in its verdict, Tom will now be able to move forward without the fear that his injury will financially devastate him with medical bills and time off of work.

The Illinois Supreme Court has denied a petition for leave to appeal of a $15.2 million jury verdict awarded to an Iraq War Vet who was seriously injured by a forklift at McCormick Place Convention Center. The decision was announced more than three years after the jury verdict was awarded in Cook County Court. On January 10, 2019, the parties resolved the case for $19.5 million, including more than $4 million in interest.

According to court documents, on September 18, 2012, 33-year-old Thomas Neuhengen of Cudahy, Wisconsin was working as a spare parts manager for Hermle Machine Co. LLC, helping with the tear down of the company’s booth from the International Manufacturing Technology Show (IMTS) at McCormick Place. Mr. Neuhengen’s left foot was run over by a 58,000 pound 40/60 Versa Lift forklift. As a result of the incident, Mr. Neuhegen suffered a degloving injury to his left foot, requiring a number of surgeries. Mr. Neuhegen is a staff sergeant in the Wisconsin Army National Guard and prior to the incident served two tours of duty in Iraq.

During a three-week trial in August 2015, Mr. Neuhengen’s attorneys argued the forklift driver, Frederick Neirinckx, failed to keep a clear view of the path of travel, failed to maintain a proper lookout and failed to use a spotter, court documents state. Additionally, Global Experience Specialists, the company that set up the trade show and hired Mr. Neirinckx, did not have a policy in place to ensure forklift drivers were trained and evaluated three-years prior to the 2012 IMTS. The company also failed to assign a three-person crew to the 40/60 Versa Lift. Global Experience Specialists was cited with four safety violations by the U.S. Occupational Safety and Health Administration. [THOMAS NEUHENGEN, Plaintiff v. GLOBAL EXPERIENCE SPECIALISTS, INC., a Nevada Corporation; and FREDERIC NEIRINCKX, Individually, Defendants. Case No. 12 L 011854]

Following the trial, GES filed post-trial motions and a request for a new trial, arguing the Plaintiff’s attorneys failed to prove GES’s willful and wanton conduct. The trial court upheld the compensatory damages but granted the Defendants’ motion as to punitive damages, resulting in the $3,000,000 punitive damages amount being stricken. The court reasoned that the Plaintiff did not prove proximate cause as it related to the corporate defendant’s willful and wanton conduct.

On June 28, 2018, the Illinois Appellate Court First District affirmed the trial court’s decision to deny a motion for a new trial and the defendant’s request for a remittitur on the compensatory damages. The Appellate Court reinstated the punitive damages, finding the Plaintiff did, in fact, provide sufficient evidence to support the jury’s award that willful and wanton conduct by GES was a proximate cause of Mr. Neuhengen’s injuries.

Following the Appellate Decision in June, defense counsel for GES filed a petition for leave to appeal with the Illinois Supreme Court.

On January 2, 2019, the Illinois Appellate Court First District was notified of the Supreme Court’s decision to deny the petition for leave to appeal. On January 10, 2019, the parties entered into a settlement agreement for $19.5 million. This figure included post-judgment interest, which was a disputed matter.

“After three years of a hotly contested appeal, Tom is very thankful that this case has come to a conclusion. Between the compensatory and punitive damages the jury provided in its verdict, Tom will now be able to move forward without the fear that his injury will financially devastate him with medical bills and time off of work. The Defendant, GES, will have to pay the amount the jury determined they should be punished for their misconduct, and we hope it serves as a reminder to ensure safety is a top priority at their company.”

For more information or editorial materials, please contact Marcie Mangan, at (312)-372-1227 or mmangan@salvilaw.com.