Fan favorite to perform in Duncan on June 4, 2021 at the Simmons Center 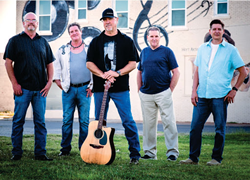 Chisholm Trail Arts Council is definitely ending their CTAC Live Concert Series on a positive note with the favorite local band, Summer Breeze. Come celebrate and honor Summer Breeze’s 45th anniversary in the Simmons Center Theatre on June 4th! The band has been perfecting their song lineup for this concert that includes many cover band favorites, and they are also including a wonderful tribute to The Eagles.

Formed in 1976, Summer Breeze is known as one of the top cover bands in the state. The band also has had the opportunity to be the opening act for over 75 of Nashville's top recording artists. Summer Breeze’s musical influences are The Eagles, Restless Heart, George Strait, and Brooks & Dunn as well as countless others. Tickets are selling pretty fast for this show, and the Chisholm Trail Arts Council is proud to have them as part of the CTAC Live Concert Series. What an awesome way to end our season… saving the best for last.

Summer Breeze is a five-member band:

To purchase tickets, please visit CTAC online at http://www.chisholmtrailarts.com. Attendees may also purchase tickets at the Simmons Center, located at 800 Chisholm Trail Parkway in Duncan, OK. Tickets are $20.00 per adult, $15.00 per senior or military, and $10.00 per student. The show will begin at 7:30 PM on June 4, 2021 at the Simmons Center.

A special thank you to Duncan Regional Hospital for its continuous support of the Chisholm Trail Arts Council’s CTAC Live Concert Series. For more ticket information, please call the CTAC office at 580-252-4160.