Sunny Aleshire Kaiser’s newly released “Collateral Damage” is a suspenseful tale of intrigue and murder that will captivate the imagination.

“Collateral Damage” from Christian Faith Publishing author Sunny Aleshire Kaiser is a stirring tale of family connection and unexpected twists of fate that set a father on a surprising path. 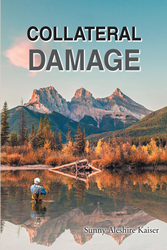 “Collateral Damage”: an enjoyable journey to an unsuspecting small town full of secrets. “Collateral Damage” is the creation of published author Sunny Aleshire Kaiser, a dedicated wife and mother who served in the administration field within healthcare services. Kaiser lost her battle with ovarian cancer in 2011 and will always be cherished for her passion of life, love of family, and her service to others.

Kaiser shares, “Secrets, shame, and spite, like cancer, slowly invade and destroy the relationships most dear to us. George Patterson knows firsthand the nightmare left in their wake.

“George Patterson is no stranger to tragedy. His father died four days before he was born, and his mother died when he was a teen. The most recent tragedy has left him reeling, the loss of his wife of thirty-five years, Kate. George is trying to get on with life in his peaceful hometown of Sisters, Oregon. Two of his three children live in the same small town and work alongside him in his hardware store and provide some comfort, but every day is a struggle.

“Just when it seems he might find some normalcy in life after Kate, a brutal murder of one of his fishing buddies and one of Sisters’s most beloved citizens—the high school football coach—rocks the town. Then the prime suspect turns out to be a former hometown hero, his son David. George never thought he’d see his son again. David left for college fifteen years ago and never returned. Despite multiple attempts to bridge their estrangement, George has been unsuccessful in making peace with his oldest son. Friends, neighbors, and the police are all convinced of David’s guilt. George posts bail while David is awaiting trial, but after years of a turbulent relationship, George isn’t sure whether to believe his innocence or guilt.

“Can George trust in his son’s innocence? Will father and son reconcile the wounds of the past? Can George trust in God’s plan after disappointment and heartache? Collateral Damage shows how one man discovers that even when it appears all hope is lost, God is at work in our lives.”

Published by Christian Faith Publishing, Sunny Aleshire Kaiser’s new book will entertain as readers race to see what lies within the sleepy town of Sisters, Oregon.

Kaiser paints a vivid picture that provides readers an enjoyable reading experience within the pages of her emotionally charged narrative.

For additional information or inquiries about “Collateral Damage,” contact the Christian Faith Publishing media department at 866-554-0919.