Forestation is a possible solution to global warming; however, land and resource restrictions restrict its potential. The Super Chimney is a large structure which can generate clean energy and irrigate deserts and at zero cost. Recently developed mathematical models and simulations demonstrate that this invention can not only work but help solve the largest crisis facing mankind. 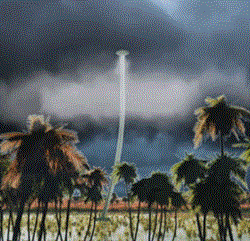 The simulation shows that the concept clearly works and can deliver amazing results, such as desert irrigation and cooling of Earth’s atmosphere.

There has been a lot of talk lately about how forestation can be used as a means to reduce the levels of carbon dioxide in the Earth’s atmosphere. Proponents say that forests can sequester CO2 into soil, thus reducing global warming. Unfortunately, according to the latest IPCC report, land is a critical resource and attempts to curb CO2 by forestation are futile. This is because we do not have enough land and water to do forestation in sufficient proportions.

Luckily, there is solution which can solve this dilemma. Back in 2008, Michael Pesochinsky developed the idea of utilizing Super Chimney technology as a unique way to avert a global warming catastrophe and simultaneously generate clean energy and provide desert irrigation. A 5km tall structure can provide enough water precipitation to irrigate any desert at $0.00 energy costs. In addition, once our planet’s deserts are irrigated they will turn into forests. These forests will be carbon sinks without taking away arable land or food supplies from humanity.

Below is an educational video released in August 2013 which explains how the Super Chimney works, how it cools the atmosphere, and how it can be built.

As soon as the concept was released there was criticism, saying that it cannot work as it violates the physics of Earth’s atmosphere. To resolve this issue a mathematical model and simulation of the process was needed. Today we are glad to announce that the mathematical model was built and successfully implemented using CFD (computational fluid dynamics) methodology. The simulation shows that the concept clearly works and can deliver amazing results, such as desert irrigation and cooling of Earth’s atmosphere. The article was published and can be read here:

The Superchimney project now moves to the next step, finding a feasible engineering solution to build the meteorological reactor. All investors, influencers, and even volunteers are invited to take part in our project and make another step towards solving the global warming crisis

Everyone is encouraged to spread this news about the invention. The website SuperChimney.org outlines the invention and gives finer details, including how the invention works and supporting calculations. Please “like” it on Facebook and other social media sites and lets make this solution go viral! Discussions on social forums will help make people aware of it. The global warming crisis can be solved in the foreseeable future if the Super Chimney idea attracts the attention of governments and investors from all over the world.