In a recent poll from Express Employment Professionals, business leaders overwhelmingly say they don't support a minimum wage hike right now, while job seekers only narrowly call for one. 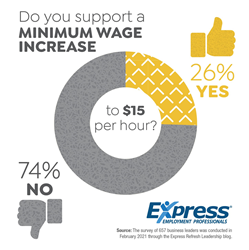 "Everyone deserves a fair wage, and we see this happening all over the country as demand picks up again." - Express CEO Bill Stoller

Seventy-four percent of business leaders do not support a federal minimum wage increase to $15 per hour, while job seekers narrowly support the measure at 57%.

This is according to a recent poll conducted on Express Employment Professionals’ blogs for business leaders and job seekers.

When asked further how a $15 federal minimum wage would impact their employee count, 51% of business leaders said they would have to reduce their workforce numbers, and 42% said there would be no impact. Seven percent said they could actually increase headcount with the change.

Job seeker survey respondents provided examples of how the minimum wage increase would impact their household, including:

In Florida where Express franchise owner Mike Brady operates, state legislation dictates a gradual minimum wage increase over the next three years until it reaches $15 an hour.

“I think employee count at clients we serve will stay the same and others will decrease a little,” the Jacksonville franchisee said. “It’ll be a mixed bag that will impact all companies in some form or fashion.”

“There’s no question in my mind there will be fewer people working—it’s already happened going from $9.60 to $12 where it currently is at,” said Dwight Hahn, Windsor, Connecticut, Express franchise owner. “There is only so much margin in our manufacturing machine and the workforce will undoubtedly be reduced to keep costs affordable.”

In addition to the immediate impacts, both Brady and Hahn see long-term consequences that would impact the workforce.

“A big impact is having less people working,” Hahn said. “Businesses will have no choice but to make up the cost somewhere, and much of it will be in the area of manpower. Additionally, there will be fewer low-paying jobs for the person who wants entry-level work, part-time work or a second job.”

Brady predicts consumer goods, fast food and other services will cost more and the low- or no-skill workers will be negatively impacted.

“We’ll see the skills gap widen as a result of fewer opportunities to learn through entry-level positions, and the market will become even more competitive,” he said.

“The principle is the same regardless of the location in the country,” he said. “There is a finite amount of payroll money to go around and businesses need to make tough decisions to keep their operations running within budget and at levels where their services are affordable to consumers.”

With the potential to impact so many parts of the economy, Express CEO Bill Stoller said any action on the proposed $15 minimum wage should be weighed carefully.

“Despite making strides to repair the economy, businesses are still struggling to recover from the COVID-19 shutdowns,” he said “Now might not be the best time to put their existence in further jeopardy by passing blanket legislation for very different parts of the country. Everyone deserves a fair wage, and we see this happening all over the country as demand picks up again.”

Survey Methodology
The survey of 1,290 business leaders, decision makers and job seekers was conducted in February 2021 through the Express Refresh Leadership and Job Journey blogs.

If you would like to arrange for an interview with Bill Stoller to discuss this topic, please contact Sheena (Karami) Hollander, Director of Corporate Communications and PR, at (405) 717-5966.

About Express Employment Professionals
At Express Employment Professionals, we’re in the business of people. From job seekers to client companies, Express helps people thrive and businesses grow. Our international network of franchises offers localized staffing solutions to the communities they serve across the U.S., Canada, South Africa, Australia and New Zealand, employing 526,000 people globally in 2020. For more information, visit http://www.ExpressPros.com.