Hanshan Temple Bell Ringing Festival, one of China’s oldest and largest New Year’s festivals, will be shared on @VisitSuzhou December 31 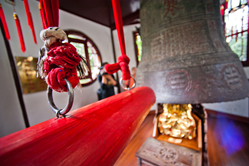 The Hanshan Temple Bell Ringing Festival, held on the grounds of one of Suzhou’s most sacred ancient sites dating back more than 1,500 years, is a must-see experience for anyone interested in Suzhou’s unique local culture and Chinese Buddhist traditions.

For the first time ever, the Suzhou Municipal Bureau of Culture, Radio, Television and Tourism will share one of China’s oldest and largest celebrations of the New Year with the world via Instagram Live at @VisitSuzhou. The Hanshan Temple Bell Ringing Festival, held on the grounds of one of Suzhou’s most sacred ancient sites dating back more than 1,500 years, is a must-see experience for anyone interested in Suzhou’s unique local culture and Chinese Buddhist traditions.

On the evening of December 31, the Hanshan Temple grounds will come alive with cultural performances such as Kunqu Opera, a locally created performing artform that has been recognized as an Intangible Cultural Heritage of Humanity by UNESCO. Many visitors will take the opportunity to pray for good fortune for themselves, family, and friends heading into the new year by making wishes as they burn incense, light auspicious red candles, and write their desires on red ribbons before tossing them onto the branches of designated trees. (If your ribbon stays hanging, legend says your wish will be granted.) At the stroke of midnight, thousands of revelers pause to listen as monks ring Hanshan Temple’s giant bell 108 times. According to Buddhist legend, there are 108 types of annoyances that can affect a person each year, and each toll of the bell can help dispel one of these annoyances.

People around the world can view the festivities on Instagram Live starting at approximately 9:30 p.m. Chinese Standard Time (8:30 a.m. EST / 1:30 p.m. GMT) and video will be archived for viewing on the platform for 24 hours. Suzhou is also inviting social media users to share their prayers and wishes for loved ones in 2021 on the @VisitSuzhou Twitter, Facebook, and Instagram channels in the days leading up to New Year’s Eve. Finally, an exclusive New Year’s Eve-themed sweepstakes has launched at TravelToSuzhou.com where consumers can enter to win a $1,000 American Express gift card that can be used for future travel to Suzhou, along with a Feng Shui bell to bring luck to the winner’s home year-round.

These online activities are part of “Suzhou, The City of Culture & Arts,” a recently launched integrated marketing campaign designed to bring the destination’s fascinating cultural heritage to life for English-speaking travelers in North America and Europe.