Hollywood comedian Kevin Hart has invested in Ellis Island Tea, an innovative beverage brewed in Detroit by Nailah Ellis, whose Jamaican ancestor inspired the recipe. The Jamaican Sweet Tea, already found in select Sam’s Club stores, Costco, and airport concessions around the country, will be rolling out this month in Walmart and is coming soon to CVS and Target. 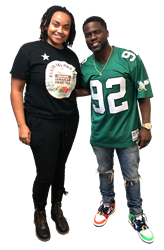 Nailah Ellis, maker of Ellis Island Tea, meets with Kevin Hart, who is now an investor in her Detroit-based beverage company.

You're supposed to set up for the next generation.

The story always matters to Hart. An artist and an author, Hart knows an audience looks for truth and a way to connect. So, when Ellis introduced him to her family tea, he was intrigued.

The tea’s history and Ellis’s own backstory of starting with nothing at the age of 20, brewing tea in her mother’s kitchen and selling it from the trunk of her car around Detroit resonated with Hart. Hart’s own story is one of resilience and perseverance – working small clubs and honing his craft for years before becoming a bankable star who commands $10 million-plus a movie.

“There were a lot of people pulling for Nailah,” said Hart, who was impressed by the Detroiter’s determination and hustle. “Her name just kept coming up and coming across my radar. So, I figured there had to be something to it.”

Ellis won BET’s Queen Boss business competition and her company’s growth has been chronicled in national media, including The Wall Street Journal, Forbes, MSNBC, The Financial Times, The Root 100 and Black Enterprise. Accolades and awards have poured in, but Ellis has always focused on building a business that endures.

Today, Ellis has her own Detroit beverage production facility and is the largest Black female beverage manufacturer in the United States. Her tea is an emerging national brand sold by retail giants Sam’s Club and Costco and airport concessioners across the country.

Hart’s investment comes at a critical time – Ellis Island Tea will be rolling out in Walmart this month and will soon debut in Target and CVS. With Hart’s backing, sleek new packaging, competitive pricing, and new e-commerce options, Ellis expects rapid growth.

Ellis has always given a nod to the man who inspired the recipe for Ellis Island Tea – her Jamaican Great-Grandfather Cyril Byron.

“Cyril’s story is one of a true risk taker. He came here with nothing but his dreams,” Ellis said. “He went on to become a head chef on Marcus Garvey’s Black Star Line and then the owner of Byron Caterers, one of the most successful Black-owned catering businesses in the Bronx.”

Cyril was an optimist, an activist, an entrepreneur and a pragmatist, she said. When he passed down his tea recipe for future generations, Cyril said ‘This recipe is to be sold, not told.’

Hart also is a big believer in building for the future. The soon-to-be father of four has said that “You’re supposed to set up for the next generation…if you’re not doing that, you’re not doing your part.”

Ellis takes that seriously as well. She is building upon the dreams of her ancestors, hoping to pass on a legacy to her two young daughters. She’s also proud to be providing jobs for Detroiters like herself.

“We all need opportunity,” she said. “I’ve been given mine and now I’m paying it forward and providing that for others.”

ABOUT ELLIS ISLAND TEA
Ellis Island Tea is the only Jamaican Sweet Tea made in America. It is an all-natural bottled tea made from hibiscus with a smooth, refreshing flavor. Ellis Island Tea comes sweetened with pure sugar cane and honey or in an unsweetened version that is crisp and tart.

When she founded her company back in 2008, Nailah Ellis realized a lifelong dream to become an entrepreneur. Brewing Ellis Island Tea continues a family legacy. The tea is based on a recipe created by her Great-Grandfather Cyril Byron, a Jamaican immigrant, chef and entrepreneur who told his family the recipe was to be “Sold, not told.” Ellis-Brown honors those words every day working from her company headquarters in Detroit where the tea is brewed.

Ellis Island Tea, in its sleek new packaging, comes in Jamaican Sweet Tea and Unsweet Jamaican Tea flavorsEllis Island Tea will soon be found in Walmart Stores. It is also coming soon in Target and CVS.