The Ahmadiyya Muslim community is calling upon international organisations such as the UN and Governments to treat the refugee crisis as a global issue and not just as a European issue, saying that a proper co-ordinated plan is urgently needed to distribute the refugees globally, rather than only focusing on Europe. 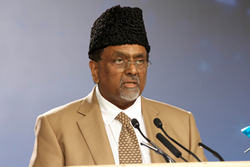 Rafiq Hayat, the Amir (National President) of the Ahmadiyya Muslim Community in UK

Arab World Should Fulfil Its Role To Care For Refugees

The leader of a Muslim community has called for a global solution for the refugee crisis in Europe, saying Arab countries should ‘first and foremost’ provide refuge for migrants.

And, he warned the world to be ever vigilant to the threat of terror saying proper checks should be in place to ensure extremists did not pose as refugees.

“The sympathies of the Ahmadiyya Muslim Community are with all genuine asylum seekers and refugees.

“Genuine refugees are facing great difficulties. They have been forced to leave their countries due to the intolerable conditions and so should be treated with love, compassion and kindness. The entire world will have to show compassion and open hearts for this crisis to be handled. Rather than looking at their own interests only, nations will have to consider their moral responsibilities to those who are suffering.”

The Ahmadiyya Muslim community is calling upon international organisations such as the UN and Governments to treat this as a global issue and not just as a European issue, saying that a proper co-ordinated plan is urgently needed to distribute the refugees globally, rather than only focusing on Europe.

“First and foremost, the Arab countries, who are neighbours, should fulfil their roles and so countries like Saudi Arabia, Qatar, Kuwait and others like Iran should give refuge to the refugees as much as possible. Thereafter, refugees should be sent across the world, based on a co-ordinated international plan. In addition to the Arab countries, Europe, USA, Canada, Far East, Indonesia and other parts of the world should take their fair share.

“Taking a global response will be just and fair. No one country or continent should have to bear the entire responsibility or burden.”

The Ahmadiyya Muslim Community UK is offering special prayers in all its mosques across the UK for those fleeing persecution. It is engaged in a charitable and humanitarian response work to ease the suffering of the tide of humanity that is seeking sanctuary.

They will call on all governments to act quickly to ease the suffering of refugees, stressing the need for greater international action to end ISIS’s barbaric reign, noting that the quicker that this pernicious evil is destroyed, the quicker people can return to their homelands and rebuild their lives.

Sounding a note of caution in the handling of the refugee crisis, The Amir added:

“Proper control measures should be in place to make sure that the refugees are genuine and not extremists or terrorists posing as refugees.

“The world should also seek an enduring resolution to the crisis so that in 6-12 months from now we are not faced with another migrant crisis.“

NOTES TO EDITORS
The Ahmadiyya Muslim Community is dedicated to reviving the true and peaceful teachings of Islam and. Established in 1889, and based in UK since 1913, it built the first mosque in London in 1924. In 2003 it opened in Morden, south London, the largest mosque in Western Europe, which can accommodate more than 13,000 people.
Ahmadi Muslims raise hundreds of thousands of pounds for charities each year and have their own charity Humanity First that is serving humanity locally as well as in all parts of the world irrespective of colour, race or religion. Ahmadi Muslims are the pioneers of interfaith dialogue and live by their motto of Love For All Hatred For None.
Ahmadi Muslims accept Hazrat Mirza Ghulam Ahmad, a 19th century spiritual reformer from India, as the Messiah awaited by all major religions. The community is led by a Caliphate and His Holiness Mirza Masroor Ahmad, is the fifth Caliph of the Worldwide Ahmadiyya Muslim Community and is based in London.