T.C. Owen’s new book “POTUS: A Political Fantasy in Three Parts” is a thought-provoking work of fiction exploring American politics and the true meaning of freedom

Recent release “POTUS: A Political Fantasy in Three Parts” from Page Publishing author T.C. Owen is a riveting novel centered on a newly inaugurated US president whose fervent desire to achieve a perfect freedom not only for America, but for the universe inspires every decision and curses him with feelings of failure and sorrow when his ultimate goal seems unattainable. 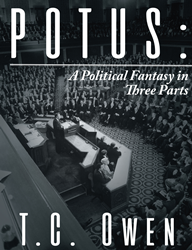 T.C. Owen, a retired junior college English instructor with a lifelong interest in politics and government, has published his new book “POTUS: A Political Fantasy in Three Parts”: a fascinating study of the universal human quest for freedom.

The author writes, “‘POTUS: A Political Fantasy’ is the story of a semi-reluctant hero acting for the people of the United States and the world, as well as the universe at large. The improbability of his election to the presidency is offset by the prodigious efforts he makes to accomplish a simple goal: the restoration of freedom for the people of the United States and the world at large, as well as establishing it for sentients in the cosmos. This simple goal inspires him and, at the same time, exasperates him. He lives to inspire and free others, while, at the same time, he feels that the inspiration demands too much of him and reduces his own freedom. His life is blessed with extreme joy and accomplishments, but, as often as not, beset with abject sorrow and fear that he has accomplished nothing. He is a man for the ages but feels that he is inadequate for the jobs he has set out for himself. His growth throughout the novel allows him to at last believe that the impossible is attainable, yet sometimes at great costs.”

Readers who wish to experience this engaging work can purchase “POTUS: A Political Fantasy in Three Parts” at bookstores everywhere, or online at the Apple iTunes store, Amazon, Google Play, or Barnes and Noble.