T.S. Adams’s newly released “Gwendolyn and the Green Dragon” shares the riveting ventures of Gwendolyn across the lands

“Gwendolyn and the Green Dragon” from Christian Faith Publishing author T.S. Adams is a thrilling saga that follows Gwendolyn and her companions on a search for her friends as she goes against terrifying challenges and literal dragons to slay. 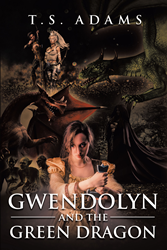 Adams shares, “Gwendolyn’s adventure continues. With hopes of returning to Moortop and finding her friends, Gwendolyn and the Brother’s Three find themselves off on another adventure given them by a dying wizard to save a dragon before being attacked and Gwendolyn taken.

“In the tower held by the hag, Gwendolyn finds a secret no one was ever meant to remember.

“The journey takes Gwendolyn across the land as she finds new friends along the way and pits her wits against dragons—one she must save, and the other she must survive.

“The witch’s army gathers in strength as invaders find their way to the shores of New Davenport. King John takes his army to fight as another secretly descends on his kingdom. Moortop fights for the very survival of its people.

“With treachery around every turn, can Gwendolyn find a way to help save her friends, or will she be too late to stop the dragon king?

“As her journey deepens and her past is uncovered, Gwendolyn finds herself in a twist of events that seem to make her journey home again seem impossible.”

Published by Christian Faith Publishing, T.S. Adams’s new book is an interesting and fascinating novel that will keep readers thrilled as the protagonist strives to win a battle that has her discovering more of herself in the process.

View a synopsis of “Gwendolyn and the Green Dragon” on YouTube.

Consumers can purchase “Gwendolyn and the Green Dragon” at traditional brick & mortar bookstores, or online at Amazon.com, Apple iTunes store, or Barnes and Noble.

For additional information or inquiries about “Gwendolyn and the Green Dragon,” contact the Christian Faith Publishing media department at 866-554-0919.