Singer/Songwriter Tamika Nicole sings about addiction in "Next To Me". 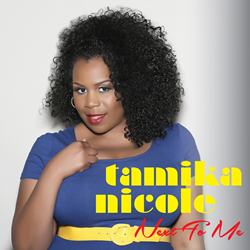 Tamika Nicole Next To Me Single Available on iTunes, Amazon, and Google Play Now!

What I’ve discovered is that my music and my lifestyle go hand in hand for many of my followers on social media.

Addiction. That’s the only word that comes to mind when you hear about Tamika Nicole’s attitude toward the music industry and her brand new single “Next To Me”. It’s been five years since the independent artist has released any music, but she’s back with a funky new track and new perspective on her role in music. “I took some time off because I needed to evaluate why I was doing music…not to mention I found myself unemployed and in jeopardy of losing everything,” explains Tamika Nicole.

Tamika took to Facebook with her very public struggle, engaging her nearly 2,000 followers in discussions about the local and global music scene, lack of support amongst musicians in the music community and performing for art versus your audience. Tamika did not always find a very sympathetic ear to her thoughts, but it did help her put her own path in perspective. “This was one of those times social media was a very positive force during hard times. In the process I figured out what was important to me and I believe I emerged an entrepreneur.”

That meant no more music as usual. Tamika began producing her signature show-Ladies Rock Da Mic supporting local charities instead of just starring in concerts. She wrote a cookbook, and she honed in on her writing and music production skills. It’s the latter that makes her so proud of her new release “Next To Me”.

“This song is a culmination of all I’ve learned about producing songs so far. This song was produced by up and coming Producer/Guitarist Cam Perridge. However, I had a big hand in producing this song from choosing the musicians as well as arranging backgrounds. I've been writing for my projects, but this time I really felt like a producer."

Tamika, who is known for having a raspy, blues style voice and a style to match with rock and funk thrown in, brings in a lot of bass on this track and leans heavily on her lower register, a handsome coupling for a song about addiction. Tamika didn't have a lot to say about the content: “I never write love songs, this is one of two.” Yet many might argue this is not a love song at all, well not in the fairy-tale, traditional sense. This tale of a woman willingly participating in a dysfunctional relationship is not about denial of dysfunction, but acknowledgement – ‘there’s no good reason inside of you, but I like what you do’ the lyrics read. The woman in this song is fully aware of her addiction and willingly participates as the chorus cries out ‘I don’t care what you do/ I’m Addicted/ I need you next to me.’ This song is addiction at its finest and Tamika delivers it with conviction.

“This song is partly about my own journey dating, but I get a lot of material from Facebook. My followers love to chime in on my dating disasters, inevitably to share their own. What I’ve discovered is that my music and my lifestyle go hand in hand for many of my followers on social media. They are just as interested in what I am doing as the music I put out…and they support them all equally.”

When Tamika started producing Ladies Rock Da Mic, she already had a built in audience. The show which takes talented Bay Area singers, spoken word artists and musicians and puts them in front of a live band is in essence a choreographed open mic hosted by Tamika Nicole, leaving the audience feeling that they may just be called up next. The crux of the show though is not the music, but the fact that each show benefits a local organization. “Our regulars ask what they can bring to donate as soon as they hear about a show. They love that they get a great show and they are helping their community. It’s music with a purpose.”

Tamika’s electronic cookbook “I Love Macaroni and Cheese” spurned a teaching and catering business, Taste My Goodies, which fills a niche market of gluten free soul food. “This business was really just an extension of my own journey with food and learning to control my weight. Turns out other people like to eat healthy soul food too!”

Now with more businesses under her belt Tamika Nicole is seeing music in a whole new way. “Now I sit at the table with various brands that I can deliver alongside my music, which is opening up different doors for me. Music is no longer my primary business, but like an addict I keep coming back. I won’t ever give it up. I guess my song could almost be about my dysfunctional relationship with music. Hey, we all have our vices.”

Tamika Nicole is an independent artist from Oakland, California. Her new release “Next To Me” was released on May 14, 2014 and is available on iTunes, Amazon and Google Play. You can follow her on Facebook and Twitter.