The Outback Bowl is thankful for the positive impact local charities are having across the region and is grateful they are able to support the mission of so many incredible organizations. 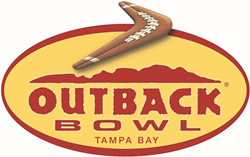 The Outback Bowl is thankful for Tampa Bay charities, especially during the Thanksgiving season.

“We are thankful to be surrounded by so many incredible organizations in Tampa Bay,” said Jim McVay.

Thanksgiving is a wonderful time to reflect on all the good things in life. In Tampa Bay, the Outback Bowl is taking time to celebrate the hard-working, caring, inspiring community members that give their time and treasure through the region’s non-profit organizations. In 2019 alone, the Outback Bowl has had the privilege of giving $1 million to charitable organizations that are helping to make Tampa Bay a better place for all.

“We are thankful to be surrounded by so many incredible organizations in Tampa Bay,” said Jim McVay, President & CEO of the Outback Bowl. “You don’t have to look far to see the impact they have on individuals, whether it’s providing meals, mentors or medical help to those who need it most.”

McVay has been a member of the Tampa Bay community for more than 40 years. “Since I’ve lived in the Tampa Bay area, I find more and more to be thankful for each year, especially as our organization has gotten more involved with the non-profit organizations that help to make our region special,” McVay said.

The Outback Bowl is also thankful for the fans, teams and local hospitality providers that make the New Year’s Day bowl a reality. Over the history of the bowl, fans and teams have generated over $1 billion in economic impact for the Tampa Bay regions and participating universities have to date received $149 million dollars.

This positive fan support and the longest running Title Sponsor relationship in the history of any bowl game make the Outback Bowl’s charitable giving a reality.

This year, and every year, there’s much to be thankful for at the Outback Bowl. To learn more about the charities that the Outback Bowl supports through the Charitable Giving Initiative, visit http://www.outbackbowl.com/give.

ABOUT THE OUTBACK BOWL:
The Outback Bowl attracts visitors from more than 40 states each year to join local fans for the game and week of events while generating tens-of-millions of dollars in exposure for the region. The Bowl boasts the longest title sponsor in bowl game history with Outback Steakhouse celebrating its 25th year with the game. The Bowl has contributed over $149 million to universities over its history and is estimated to have generated more than $1 billion in economic impact for the Tampa Bay area over this time. It has also contributed more than $1.5 million to area charities since 2016 and has committed to paying an additional $45 million to universities and donating at least $3 million more to charities through the 2026 game.