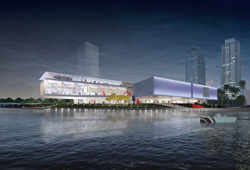 A view of the renovated and expanded Tampa Museum of Art from the Hillsborough River in downtown Tampa, Fla.

“We recognize that this expansion extends far beyond physical infrastructure...the structure brings a huge ‘wow’ factor, but its welcoming communal spaces will bring the reinvented TMA to life for everyone.”

The Tampa Museum of Art this morning announced a transformative expansion plan for its downtown Tampa campus that will add a crystalline, four-story structure to the waterfront, significantly enhancing the visitor experience and expanding the Museum’s education and event spaces. When completed in 2024, the expansion will include a site redevelopment and add approximately 51,000 square feet of new space along the Hillsborough River to its 25,000 square foot renovation currently underway to double its exhibition spaces and triple its education spaces.

“This is a transformational project for Tampa and the wider region,” said Michael Tomor, the Penny and Jeff Vinik Executive Director at the Tampa Museum of Art. “After announcing our renovation earlier this year, our board and community stepped up to allow the museum to grow even further, providing overwhelmingly generous support for our community partnerships and expanded education programs.”

More than 80 percent of the $80 million budget for the current renovations and future expansion will be privately funded by the Museum’s Board of Trustees, the Foundation Board of Directors and other community supporters, Museum patrons and members. The lead gift toward the total $100 million campaign to expand the Museum’s facilities and invest in the Museum’s endowment is a matching gift from a community stakeholder who hopes to encourage other stakeholders to participate in growing Tampa’s cultural legacy.

The Museum’s site redevelopment of Curtis Hixon Park, a key component of the expansion project, has been partially funded through a grant from the Community Revitalization Area tax fund (CRA) and includes work on new pedestrian plazas and refurbishment of pedestrian walkways on Cass Street. In addition, County grant funding supporting the renovation and expansion design components has been committed by the Hillsborough County Commission, championed by Hillsborough County Commissioner Harry Cohen.

The Tampa Museum of Art celebrated its 100th anniversary in 2020, and its current building, designed by San Francisco architect Stanley Saitowitz, opened in 2010, three years after TMA became a nonprofit independent from the City of Tampa. At that time, museum leaders anticipated a second phase of expansion and development, which is now underway.

“I think with this addition, people will look at Tampa differently. Having lived in the Tampa Bay area all of my life, this city has been very important to me. I believe that the cultural life of the city is key to our long-term success, and I believe that a fine art museum is key to that cultural life,” said Jerry Divers, chair of the Campaign Cabinet and president of the Tampa Museum of Art Foundation.

“The expansion of the museum is going to incorporate so many different amenities that will draw the community in and create a feeling of ownership,” said Tampa Mayor Jane Castor. “Looking at the future of the Tampa Museum of Art really goes hand-in-hand with the growth of our city as being very dynamic, very robust, and having something for everyone here in the city of Tampa.”

Over the past three years, the Museum Trustees, Foundation Directors, and outside consultants have been developing plans based on demand, usage, and sustained annual growth in all departments. In 2021, TMA began major renovations to enlarge programming spaces, dramatically expand the Education Center, and complete substantial repurposing of administrative and storage spaces to make room for additional galleries.

“We recognize that this expansion extends far beyond physical infrastructure, and our goal is to integrate the museum with the vibrant Riverwalk and downtown that surrounds it,” said Dianne Jacob, chair of the Tampa Museum of Art Board of Trustees. “The structure brings a huge ‘wow’ factor, but its welcoming communal spaces will bring the reinvented TMA to life for everyone.”

When completed, the project will establish an accessible pedestrian and cultural experience for both residents and visitors. The expansion will rejuvenate outdoor spaces that extend beyond the museum structure, including new landscaped public access points along Cass Street, creating a seamless transition with pedestrian plazas between the public park spaces adjacent to the Riverwalk, Curtis Hixon Waterfront Park, and two new dog parks. It will also:

“The doubling of our gallery space is so important and so wonderful, and the public area is going to be spectacular, something that will draw a lot of people,” said trustee emerita and former board chair Cornelia Corbett.

Download the media kit, including video and illustrations of the expansion.

About the Tampa Museum of Art
Founded in 1920, the Tampa Museum of Art inspires the residents of the Tampa Bay region and others around the world by providing engaging exhibitions and innovative education programs that emphasize ancient, modern, and contemporary art. The Museum houses one of the largest Greek and Roman antiquities collections in the southeastern United States. As one of the region’s largest museums devoted to the art of our time, the Museum’s permanent collection also embraces sculpture, photography, painting, new media, and more.

Located in the heart of downtown Tampa, next to the Curtis Hixon Waterfront Park and Tampa’s Riverwalk, the Tampa Museum of Art leads as both a cultural institution and a community museum dedicated to celebrating the diversity of its home city.

About WEISS/MANFREDI Architecture/Landscape/Urbanism
WEISS/MANFREDI Architecture/Landscape/Urbanism is a multidisciplinary design practice based in New York City. Founded by Marion Weiss and Michael Manfredi, the firm is known for the dynamic integration of architecture, art, infrastructure, and landscape design. Their work is noted for the strategic engagement of architecture and site and recognizes the critical dialogue between enclosed and open spaces, between new and existing structures, and between building and city. Notable past projects include the Seattle Art Museum: Olympic Sculpture Park, the Women’s Memorial at Arlington National Cemetery, the Brooklyn Botanic Garden Visitor Center, and Hunter’s Point South Waterfront Park. The firm’s current and recent work includes the U.S. Embassy in New Delhi, India, the Artis—Naples Baker Museum and Cultural Campus, and the Tsai Center for Innovative Thinking at Yale University. Most recently, the firm was selected through an international competition to reimagine the La Brea Tar Pits and Page Museum in Los Angeles.

The firm has won numerous awards, including the AIA President’s Award, the Thomas Jefferson Foundation Medal in Architecture, the Cooper Hewitt National Design Award, the Academy Award for Architecture from the American Academy of Arts and Letters, and the International VR Green Prize for Urban Design. They have also been named one of North America’s “Emerging Voices” by the Architectural League of New York and received the New York City AIA Gold Medal of Honor. Michael Manfredi is a Senior Critic at Harvard University and Marion Weiss is the Graham Chair Professor of Practice at the University of Pennsylvania.