New Yorkers are sure to get a front row seat to where all the magical creativiTEA happens. 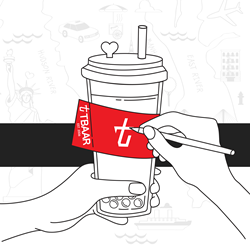 I really want to give our young artists center stage in this competition. They deserve to share in our successes too. The world would be so bland without a little creativity and color.

The creative juices are flowing and the art submissions are rolling in. As TBaar anticipates the opening of their first-ever Christmas at TBaar Cup Sleeve Art Contest, excitement is at an all time high. Founders, Gary Lin and John Lin, alongside four New York based artists, will ultimately choose two $5,000 cash prize winners.

Their designs will be featured on TBaar’s custom cup sleeves during the 2022 Holiday season. Young creators from all five boroughs are invited to submit their best depiction of Christmas in New York City. The brand opened submissions for their contest on June 1, 2022 with a deadline on July 1, 2022.

CreativiTEA is brewing at TBaar this summer. TBaar, one of New York City's original bubble tea shops, has been providing a safe space for local creatives to be, since 2006. Whether guests visit for TBaar’s popular bubble teas or to immerse themselves in TBaar’s vibrant ambiance, there is something for everyone.

TBaar’s ensemble of panelists form an illustrious group of award-winning illustrators, creative directors, designers, and professors. The bubble tea franchise is proud to introduce Justin Wu, Lorraine Nam, Ari Eleftrin, and Dingding Hu.
Artists Justin Wu and Dingding Hu share a love for food. Justin, a content creator and supporter of local restaurants, does his part by donating proceeds from the illustrations he sells. He also partners with restaurant advocacy group, ROAR. On the other side of the dining table is Dingding. Her gratifying illustrations bring out the bubbliness of the brands she collaborates with. Her work has been featured in Eater, Disney+ and The New York Times.

Hailing from Brooklyn are art director, Ari Elefterin and illustrator, Lorraine Nam. Ari takes an experimental approach to design and creative direction. Google Pixel, Nike and Converse are just a few brands who embrace their concept. Lorraine’s hands-on approach to creating intricate crafts fall in line with the colorful aura TBaar exudes. You can find some of her work featured in Snapchat, The Washington Post and Michaels.

Gary Lin expresses his excitement when saying, “I really want to give our young artists center stage in this competition. They deserve to share in our successes too. The world would be so bland without a little creativity and color.”

With TBaar’s new, simplified “t” logo, the brand is extending their creative pursuit by offering local creatives a chance to let their imagination run wild. The panelists are looking forward to seeing everyone's NYC inspired creations that mirror the energy and joy of the holidays.

About NU Media
Headquartered in New York City, NU Media is a digital marketing agency that specializes in purposeful storytelling. With a highly diverse and creative team, NU Media labors to meet and exceed client needs from in-depth planning to exceptional performance. The agency is committed to developing brands, making lasting connections and delivering impactful results.

About TBaar
Born on a small corner in Brooklyn, one of New York City's original bubble tea shops, Tbaar, maintains the highest quality ingredients directly from Taiwan. They have been brewing the highest quality tea since 2006. TBaar’s new brand image broadens their clientele to young creatives by embracing vibrant colors to create a young, fun, and energetic ambiance. Their colorful bubble teas evokes a spark, redefining #creativitTEA one freshly brewed cup at a time. Take a closer look at their bubble tea in action by visiting tbaar.com and follow them on Tiktok and IG: @tbaar.official