The potential benefits of tea are explored with experts on the program. 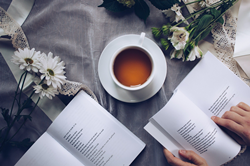 With its large variety of flavor and origin options, there's a cup of tea for everyone.

"Deep Cover" star Laurence Fishburne is best known for his versatile skill set as an actor, director, and producer. The film star can add "host" to his repertoire with his role on TV's "In Depth" with Laurence Fishburne. The educational show explores a large variety of topics that affect people around the world today. Soon the show will delve into the culture and health benefits surrounding tea in a new episode.

Tea consumption goes back for thousands of years. Many favor tea for its unique flavor and health benefits. Around the world, different countries like Japan, France, and the United Kingdom enjoy tea as a part of their culture – the British are known for making "Teatime" a daily ritual. With its large variety of flavor and origin options, there's a cup of tea for everyone.

Green tea is a popular option and is known for its detoxing properties by helping boost the immune system and eliminating bodily toxins. Black tea contains particular antioxidants that may help prevent certain types of cancer, reduce clogged arteries, and lower the risk of diabetes.

Around the world, large groups of people enjoy tea – it's the second most consumed beverage and for a good reason. Tea offers a large variety of health benefits and unique flavors. "In Depth" will reveal additional details about tea culture and its health-boosting properties in the new episode.

On In Depth, Laurence Fishburne is featured, and the program is given a careful review before shown to a broader viewing audience. The informational show has received numerous awards for its efforts.