Team Fastrax™ will be performing as part of the opening ceremony of the Foxwoods Resort Casino 301. The race is part of the NASCAR Sprint Cup Series and will be held at New Hampshire Motor Speedway. 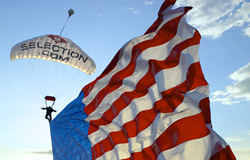 Starting on Friday, July 19, 2019, there will be a weekend packed with exciting on-track action: All Star Shootout, United Site Services 70, Eastern Propane & Oil 100, and Roxor 200 at the New Hampshire Motor Speedway. On Sunday, July 21, the Foxwoods Resort Casino 301 race, a NASCAR Cup Series, will feature a performance by Team Fastrax™.

Team Fastrax™ will perform their popular flag demonstration jump before the start of the race. The skydivers will jump in with their 2,000 sq. ft. American Flag. It is a remarkable sight.

“We are honored to be performing during such an impressive weekend at New Hampshire Motor Speedway,” commented John Hart, owner of Start Skydiving, and Founder of Team Fastrax™. “The Foxwoods Casino 301 race is a very competitive one, and it’s sure to be exciting.”

According to the New Hampshire Motor Speedway, this year’s Foxwoods Resort Casino 301 race weekend has many activities throughout the weekend including a live auction and driver appearances. Entertainment includes the Dusty Gray Band, Dirty Deeds AC/DC Tribute Band, and Love And Theft.

For more information on the race or to purchase tickets visit the New Hampshire Motor Speedway website.