Team Fastrax™ will be performing as part of the opening ceremony of the Military Bowl in Annapolis, MD. This year’s Bowl will feature a match-up between Duke and UCF. 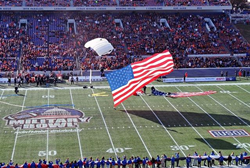 The Duke Blue Devils will face off against the UCF Knights for the first time, at the Navy-Marine Corps Memorial Stadium in Annapolis, MD in the long-anticipated Military Bowl. The match-up between the Atlantic Coast and American Athletic Conference starts at 2PM ET, December 28, 2022, and is sure to be an exciting game. Proceeds from the Bowl benefit the USO and Patriot Point, the Military Bowl Foundation’s retreat for wounded, ill and injured service members, their families, and caregivers.

As part of the pre-game festivities, Team Fastrax™ will deliver the game ball with a spectacular patriotic skydive performance, shown via live feed on the scoreboard. Just as the first notes of the National Anthem are heard throughout the stadium, fans will look to the sky as the team reverently jumps in with their 2,000 sq. ft. American Flag, 1,100 sq. ft. Purple Heart and Honor and Remember Flags, and all six flags of the Armed Forces.

“We are honored to be performing our patriotic skydive on such an important day at the Navy-Marine Corp Memorial Stadium,” commented John Hart, owner of Start Skydiving, and Founder of Team Fastrax™. “Members of Team Fastrax™ have served the United States of America as part of the Armed Forces, many in combat, so we particularly enjoy performing at any event that supports our Nation’s veterans and their families.” He added, “We’re excited for both teams to be able to play each other for the first time. It’s sure to be a good game!”

According to the Military Bowl website, Duke (8-4) enjoyed a successful season that resulted in the team’s first bowl bid since 2018. Led by a balanced offense, the Blue Devils finished second in the ACC Coastal Division, capped by a 34-31 victory over Wake Forest in the regular season finale. Nine Duke players received all-conference honors, including All-ACC first-team offensive tackle Graham Barton and honorable mention quarterback Riley Leonard. UCF (9-4) closed the regular season with four victories in its final five games, including wins over two top-25 opponents, Tulane and Cincinnati, to secure a bowl bid for the seventh consecutive season. The Knights lost to Tulane in the AAC conference championship on Saturday, 45-28. UCF also had nine players receive all-conference honors, including wide receiver Ryan O’Keefe and offensive lineman Lokahi Pauole, who were named All-AAC first-team for the second consecutive season, part of an offensive unit that ranks among the national leaders.

For more information on the game or to purchase tickets visit the Military Bowl website.