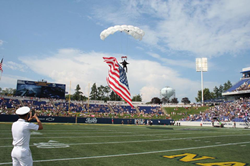 Saturday, October 2nd, the Navy Midshipmen and nationally ranked University of Central Florida (UCF) Knights will face off at the Navy-Marine Corp Memorial Stadium for the 3rd time in series history. The game starts at 3:30pm, and as part of the opening ceremony, Team Fastrax™ will gracefully jump in with their majestic 2,000 sq. ft. American Flag.

John Hart, owner of Start Skydiving, and Founder of Team Fastrax™ said, “We are honored to be performing our patriotic American Flag skydive for the Navy football game. Members of Team Fastrax™ have served the United States of America as part of the Armed Forces, many in combat, so we particularly enjoy performing at any event that honors our nation’s military.”

According to the Navy Midshipmen Football website, UCF is the only team Navy has not beaten since joining the AAC in 2015. Navy has also played fewer games against UCF than it has against any other team. The UCF game is the second of five-consecutive games in which the Midshipmen will play the top-five teams in the AAC Preseason Poll. UCF was picked second behind Cincinnati in the preseason poll.

For more information on the game or for tickets, visit the Navy Midshipmen website.

ABOUT TEAM FASTRAX™
Team Fastrax™, sponsored by SELECTiON.COM®, is the most ambitious professional skydiving team in the world. The team has a roster of more than twenty-nine active members, with a collective of more than 300,000 skydives. Team Fastrax™ has performed exhibition skydives all over the world for audiences large and small as a patriotic display or as a product promotion.
ABOUT SELECTiON.COM®

SELECTiON.COM® is a nationwide provider of criminal and pre-employment background screenings, also referred to as a Consumer Reporting Agency. Headquartered in Cincinnati, OH, SELECTiON.COM® is a veteran-owned company that has been in business since 1991 and offers more than 35 background and data collection services.