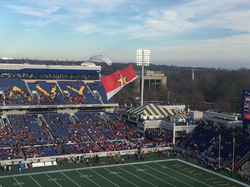 Saturday, November 12th, 2022, the Navy Midshipmen and Notre Dame Fighting Irish will face off for the 95th overall time, and the 4th time at M&T Bank Stadium. The game starts at 12pm, and as part of the opening ceremony, Team Fastrax™ will gracefully jump in with their majestic 1,800 sq. ft. American Flag, Gold Star flag, and a Purple Heart flag. The jump will be shown on the stadium’s ultra-high-definition video boards via the team’s live air-to-ground video feed. Spectators from all sections at M&T Stadium will be able to take in every breathtaking moment of the performance.

John Hart, owner of Start Skydiving, and Founder of Team Fastrax™ said, “We are honored to be performing our patriotic American Flag skydive for the Navy football game. Members of Team Fastrax™ have served the United States of America as part of the Armed Forces, many in combat, so we particularly enjoy performing at any event that honors our nation’s military.”

According to the Navy Midshipmen Football website, in addition to the Team Fastrax™ performance, there will be a flyover at the conclusion of the National Anthem. Saturday's flyover will feature 2 Boeing F/A-18E Super Hornets from the "Fighting Omars" of Fighter Squadron Composite Twelve based out of Naval Air Station Oceana, Virginia Beach, Va. The two programs are among the winningest FBS teams in college football history. Notre Dame ranks fourth all-time with 935 wins, while Navy ranks 25th with 732 wins. The 2023 Navy-Notre Dame game will be played on Saturday, Aug. 26 in Dublin. It will mark the third time the Mids and Irish have met in Ireland and the first time with Notre Dame as the home team. Notre Dame leads the series 80-13-1 and has won four in a row over the Mids.

For more information on the game or for tickets, visit the Navy Midshipmen website.