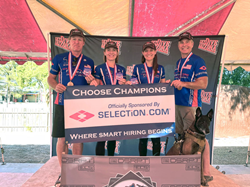 2-Way Sequential Teams consists of 2 skydivers, supported by a team videographer. They have 1 minute of working time to complete a pre-determined series of formations. A point is scored for each formation correctly completed in accordance with a draw made at the start of the event. The competition consists of 8 rounds, and within each round there are 5 different formations. The team must complete the series as many times as possible during the working time.

ABOUT TEAM FASTRAX™
Team Fastrax™, based in Middletown, OH, is the most ambitious professional skydiving team in the world. The team has a roster of more than twenty-nine active members, with a collective of more than 300,000 skydives. Team Fastrax™ has performed exhibition skydives all over the world for audiences large and small as a patriotic display or as a product promotion.

ABOUT SELECTiON.COM®
Team Fastrax™ is sponsored by SELECTiON.COM®, a nationwide provider of criminal and pre-employment background screenings. Headquartered in Cincinnati, OH, SELECTiON.COM® is a veteran-owned company that has been in business since 1991 and offers more than 35 background and data collection services.