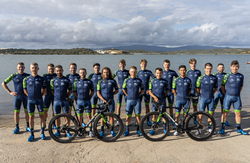 “What pleased me the most this year was the team spirit and the togetherness. Now we approach 2023 with the same attitude and fundamentally the same team,” said Vassili Davidenko, TNN General Manager

Team Novo Nordisk, the world’s first all diabetes professional cycling team, go into 2023 with an 18-rider roster that combines youthful talent with experience and ready to take on their 13th season in the UCI pro ranks.

At GP Kranj in Slovenia last July Andrea Peron achieved his lifelong dream of a professional win, demolishing the field of competition with an early attack towards the top of the final climb in central Kranj and exploding into the last 500m with nothing but focus and raw power pushing through the pedals, over the finish line and overcome with emotion.

2022 came together in that moment. A decade long career encapsulated in the final kilometer of a bike race. More than 500 million people living with diabetes around the world sharing what inspiration can look like and a community brought together with the joy of what is possible.

“What a season we had,” began CEO & Co Founder Phil Southerland. “After the challenges of 2021, we started this year by telling the guys to get back to basics. Go out there and race with a smile on your face and above all have fun. Enjoy being here and use that enjoyment to channel the pressure of racing for results at the highest level of professional cycling.”

“Guess what? It worked. Not only did we have our most consistent season ever in terms of results, our most consistent rider Andrea Peron, achieved his first career win in Slovenia at GP Kranj. After ten years of seconds, thirds, top five, top ten, and breakaways in monuments he kept pushing and banging on the door until he burst through. Diabetes didn’t stop him, and neither could the competition and I don’t think the future will either.”

Only one change appears on the roster for 2023 with Uzbekistani climber Ulugbek Saidov returning to the TNN pro team after a season spent gaining experience and results racing for the Uzbekistan national team.

“We’re very satisfied with our performances in 2022,” said General Manager Vassili Davidenko. “To be sitting here reflecting on multiple podiums, top ten placings, and Andrea’s win at GP Kranj feels like a good place to be, but also a place that we need to be more often. It’s very important that we kick on in 2023 and carry the momentum from this year, there were many positive moments including Matyas (Kopecky) and Filippo (Ridolfo) starting their pro careers strongly and developing talents like Hamish (Beadle) beginning to show maturity and produce solid performances.”

“But what pleased me the most was the team spirit and the togetherness, after such a difficult 2021 we could be forgiven for letting our heads drop, but we channeled that energy and used it as motivation. Now we approach 2023 with the same attitude and fundamentally the same team."

“We welcome back Ulugbek (Saidov) who has been on his own journey of development and is now ready to go again and play his part in helping the team. I’m excited to see what 2023 has in store and I’m sure that if we put the same hard work in then we are going to see more results and more smiles on our faces.”

Once again the balance between experience and youthful talent will be important in 2023 with the older established captains Peron, Charles Planet, and David Lozano looking to bring on the younger riders as second year pro’s Matyas Kopecky and Filippo Ridolfo look to repeat their positive debut seasons and push on to the next level.

About Team Novo Nordisk – Racing to Drive Change in Diabetes
Team Novo Nordisk is a global all-diabetes sports team of cyclists spearheaded by the world’s first all-diabetes professional cycling team. In 2012, Phil Southerland, co-founder and CEO of the team, and global healthcare company Novo Nordisk, came together to create Team Novo Nordisk, based on a shared vision to inspire, educate, and empower people around the world affected by diabetes and promote a healthy and active lifestyle. For more information, go to http://www.teamnovonordisk.com.