Team Novo Nordisk is proud to announce the signing of the Polish track sprinter Mateusz Rudyk for the 2021 season. 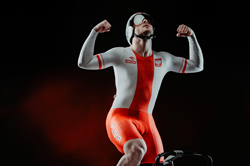 ''Mateusz is a really good young man, goal orientated, and has a big dream for Tokyo. The fact that one of the world’s top track sprinters is joining Team Novo Nordisk is a big boost to all of us,” said Team Novo Nordisk CEO and Co-Founder Phil Southerland.

Rudyk will continue to race and compete on the track as he prepares for the upcoming Tokyo Olympics. Diagnosed with type 1 diabetes at age 12, Rudyk joins 18-time US National Champion Mandy Marquardt as Team Novo Nordisk’s second fully supported professional track athlete.

“Joining Team Novo Nordisk is an important stage in my career,” began Rudyk. “The team consists of people with diabetes, just like me, and it shows that with diabetes you can be a professional athlete and achieve high results in sports.”

“The Olympic Games are my main goal. I want to fight for a medal, and I believe in myself. My goal is to show people that with diabetes I am able to be the best in the world.”

With the Tokyo Olympics the big goal for 2021, Rudyk and Team Novo Nordisk will work together over the coming months to provide the best possible environment for Rudyk to train and prepare for Tokyo.

“First and foremost, Mateusz is a really good young man, goal orientated, and has a big dream for Tokyo,” said Team Novo Nordisk CEO and Co-Founder Phil Southerland. “The fact that one of the world’s top track sprinters is joining Team Novo Nordisk is a big boost to all of us. He and Mandy have developed a friendship, and to think we have the chance at both male and female Olympians from Team Novo Nordisk is truly a dream come true.”

“Mateusz doesn't just want a medal at the Olympics, but he wants to leverage that visibility as a means to educate, empower, and inspire the diabetes community. I really look forward to working with him, helping him not only in his sporting goals, but to see his role as a hero for all of us with diabetes come to fruition. Together, we will be stronger. Together our message will go farther. And together we will be changing diabetes for the world, one person at a time.”

2021 is a major milestone and anniversary for all of the people living with diabetes around the world as it marks the 100th year anniversary of the discovery of insulin.

Keenly aware of the significance of 2021 for the diabetes community and particularly for Team Novo Nordisk, Rudyk is thankful for the opportunity joining the team presents.

“This is an important year for everyone with diabetes,” continued Rudyk. “If not for the discovery of insulin, life with this disease would have been completely different. I cannot imagine my life without insulin, it accompanies me all the time and it is one of the most important elements of living with diabetes.”

Rudyk’s first contact with Team Novo Nordisk came years earlier as a visitor to the team bus at his home Tour in Poland and after the first wheels were set in motion, the team finally had their man.

“We met Mateusz a few years ago at the Tour du Pologne and we have been developing a relationship since then” said General Manager Vassili Davidenko. “He is one of the world’s top track sprinters and a great example for everyone to see what is possible with diabetes. 2021 is an Olympic year and also 100 years since the discovery of insulin. What better way to showcase the importance of this than with Team Novo Nordisk athletes doing well at the Olympics.”

“With our structure and support within the team we want to provide Mateusz with all the help necessary to help him achieve his goals and show the world that diabetes isn’t a barrier to achieving Olympic success.”

Team Novo Nordisk is set to begin the 2021 season at the Trofeo Laigueglia in Italy on March 3rd.