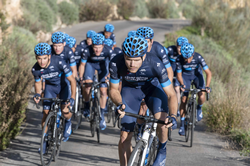 Team Novo Nordisk, the world’s first all-diabetes professional cycling team, will race its eighth season with a roster of 16 athletes from 12 countries.

"2019 has been a banner year for the team. It has been a season where teamwork clicked race after race, month after month, and we are looking forward to building upon this momentum with ambitious objectives for 2020,” Team Novo Nordisk CEO and Co-Founder Phil Southerland said.

“2019 has been a banner year for the team. It has been a season where teamwork clicked race after race, month after month, and we are looking forward to building upon this momentum with ambitious objectives for 2020,” Team Novo Nordisk CEO and Co-Founder Phil Southerland said. “As we race around the globe, we get the chance to work directly with the diabetes community and this impact is proving priceless. Witnessing those moments gives us a great sense of pride and it is humbling to receive that support and gratitude from the diabetes community. Together we are changing diabetes.”

To become a member of Team Novo Nordisk, all athletes must have type 1 diabetes. Since its launch in December 2012, the organization has focused heavily on identifying and developing endurance athletes from around the world with diabetes, building junior and development squads currently totaling 30 athletes. Both of Team Novo Nordisk’s new athletes are products of its development program. Beadle’s selection was announced in September.

“Andrea had a nice season and I am proud of his results along with his positive attitude. I believe his results were partly due to the addition of Peter Kusztor, who has a tremendous ability to rally the guys around protecting Andrea,” Team Novo Nordisk General Manager Vassili Davidenko said. “We’ve known Andrea for nearly a decade, and he has always delivered on his dreams. He dreams of winning a professional race; hopefully, we can make that dream come true together.”

“By far my proudest memory of the year were the two top 10s. I always enjoy a race where the start list is the best in the sport,” Peron said. “It was a big year for me, both with strong results and with the birth of my son. All of this served as a boost and I want to thank my coach, Federico Fontana, who also deserves credit for this season.”

While new to the roster, the 25-year-old de Keijzer raced three seasons with Team Novo Nordisk’s pro team from 2014-2017. The Dutchman briefly stepped away from the professional ranks before returning in 2019 to Team Novo Nordisk’s development squad to gain experience. Based on his results, he earned a spot back on the pro team for the 2020 season.

“It is extremely hard to earn a professional contract in bike racing, so I’m proud of this. For the 2019 season, I had one goal and that was to show the best me both on and off the bike. It was probably one of the best years I’ve had in cycling and I can’t wait to continue this growth into next year,” de Keizer said. “I spent time with the development squad years ago and being back this past season made it clear how it has grown in professionalism and strength. All of Team Novo Nordisk raise each other to a higher level and that’s what you need within a successful organization.”

This season, the Team Novo Nordisk men’s professional squad competed in four World Tour races: UAE Tour, Milan-San Remo, Tour of California and Tour de Pologne. The squad wore jerseys at each of the World Tour stage races and placed a historic four riders in the breakaway at Milan-San Remo.

“Looking ahead, I want to see some victories. We’ve gotten a taste of success this year with a record number of podium appearances, which has translated into a massive confidence boost throughout the entire organization,” Southerland said. “From a scientific standpoint, we had a big year of data collection, and now we can make some small interventions that we believe will help level the playing field for our riders. These small gains could be real difference-makers for the 2020 season, which serves as the 99th year since the discovery of insulin. It is a big year for us, a big year for people with diabetes, and it is our chance to do a big leadout so that 2021 can be the best year for everyone affected by diabetes around the world.”

About Team Novo Nordisk
Team Novo Nordisk is a global all-diabetes sports team of cyclists spearheaded by the world’s first all-diabetes UCI Professional Continental cycling team. In 2012, Phil Southerland, co-founder and CEO of the team, and global healthcare company Novo Nordisk, came together to create Team Novo Nordisk, based on a shared vision to inspire, educate and empower people around the world affected by diabetes. For more information, go to http://www.teamnovonordisk.com.

Dutchman Gerd de Keijzer will join the men's pro team for the 2020 season.

Kiwi Hamish Beadle will join the men's pro team for the 2020 season.