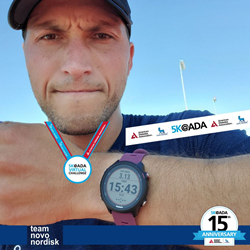 “It was heart-warming to feel so connected with Team Novo Nordisk and the broader diabetes community this past weekend. We tracked each other’s results and motivated one another to get out and exercise," said Phil Southerland.

“It was heart-warming to feel so connected with Team Novo Nordisk and the broader diabetes community this past weekend,” said Phil Southerland, Team Novo Nordisk CEO and Co-Founder. “All Team Novo Nordisk athletes, ambassadors, management, and staff participated in the event, and all weekend long, we tracked each other’s results and motivated one another to get out and exercise. It truly felt like we were together and that broader sense of connectivity is what we all need right now.”

For 15 years, the 5K@ADA has been an official event during ADA’s Scientific Sessions and has brought together tens of thousands of participants. Due to COVID-19, this year’s event transitioned into a virtual challenge. In total, 4,164 people ran and walked together from 89 different countries and 46 US states during the three-day event held June 12-14, 2020.

“2020 has been a dynamic and unprecedented year for everyone. The 5K@ADA Run/Walk allowed the diabetes community to come together despite our physical distances. Together, we were able to celebrate multiple milestones including ADA’s 80th Scientific Sessions and the 15th anniversary of Novo Nordisk’s 5K@ADA run/walk event,” said Southerland. “Alongside our amazing partner, Novo Nordisk, we ran and walked to showcase the value of physical exercise and how we are inspiring, educating and empowering everyone affected by diabetes. Together, we are improving the health of the world and creating the next generation of heroes for the diabetes community.”

The virtual event featured a multitude of interactive experiences, including training plans, a selfie station, and social media integration. Race organizers debuted new technology through their RunnerTag integration, which allowed participants to submit images complete with medals and finish line stickers. Nearly 3,000 photos were submitted by the 5K@ADA Community.

“A big thanks to ADA’s CEO Tracey Brown for the challenge and to Novo Nordisk’s CEO Lars Fruergaard for accepting my challenge. It was an honour to compete alongside these organizations and together we are Team Novo Nordisk and 43,000 strong,” emphasized Southerland.

Physical activity, including walking, is an important tool in diabetes management, which helps people living with diabetes lead healthier lives. For the more than 122 million Americans with diabetes and prediabetes, it takes perseverance to live with and manage their health on a daily basis. The 5K@ADA Virtual Challenge brought people together across the globe to emphasize the need for increased physical activity to help prevent diabetes and diabetes complications. This event provided participants with the opportunity to raise public awareness about the importance of a healthy lifestyle in preventing and managing diabetes.