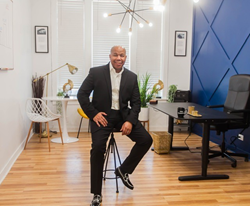 When it comes to tech coworking spaces and incubators, many are named after a number that typically represents a time in history or has a particular meaning. Whether its 1871, 2112, 1647, or 22Tech, they often times will mean something to the founder. 1921 Coworking and Incubator, NFP or 1921 for short, has a significant meaning as it honors the historic Black Wall Street of 1921 in Tulsa, Ok. It was a time where over 600 Black-owned businesses thrived in one community and sadly was destroyed by an angry white mob.

Nearly 100 years later, founder James Parker, who has owned numerous startups, saw that there was a need for a true tech incubator on the far Southside of Chicago that can help Black and Women-owned startups get trained, mentored, funded and launched and recapture the spirit of Black Wall Street.

“What was so significant about Black Wall Street, James mentions, is that each business was able to thrive and employ people who lived in the community. Two of the founders of Black Wall Street, O.W. Gurley and J.B. Stradford would help fund and support other black-owned businesses; which in turn, would create more businesses and job opportunities. My goal with 1921 is to help tech startups launch on the Southside of Chicago and throughout the country, which would then create incredible job opportunities for the people in the community and begin to close the wealth gap in America.”

Currently, 1921 has eight tech startups in its pipeline for training and mentoring once it officially opens this Summer. They have a combined projected revenue of over $400 Million and can create over 800 jobs starting at $40k/year. James is quick to highlight that most of the startups that will eventually launch from 1921, will be located on the Southside of Chicago. “It’s not the mere creation of businesses that forms our core belief in 1921," James shares, "but rather fostering the discipline and the spirit of Black Wall Street to achieve sustainability of the companies that will become the anchors and pillars in the community. Thus creating thousands of new career opportunities and a new trade area in both industry and location.”

1921 will offer an indoor and outdoor coworking space, affordable luxury rental office suites, virtual mail service, meeting rooms, and more. In addition, entrepreneurship classes and other training programs will be provided to the community to foster and encourage sustainable economic and community growth.

1921 has just kicked off its 2021 Funding Initiative and plan to raise more than $5 Million dollars to introduce programming for the community and create a Tech Black Wall Street. If you would like to learn more about 1921, please contact Jordan Taylor at jordan@1921coworking.com or visit http://www.1921coworking.com