Agency recognized by PR News as the Fastest Growing Agency of the Year and a three-time Best Place to Work. 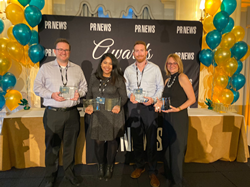 ARPR was named a Best Place to Work for the third consecutive year as well as Fastest Growing Agency of the Year.

ARPR, an award-winning tech PR agency at the epicenter of the future of PR, announced it has won or been named a finalist for 16 prestigious awards since the beginning of 2019. Validating ARPR’s Panorama Approach, awards were earned for a diversity of client initiatives, including content marketing, media relations, social media, integrated marketing and three Agency of the Year titles.

“2019 was filled with many accomplishments, fortifying the agency’s ascendance into a top tech PR agency with a global client roster,” said Anna Ruth Williams, founder and CEO of ARPR. “From partnering with marquee Silicon Valley brands to expanding our bench of top talent to repeatedly exceeding client expectations - I couldn’t be prouder of everything achieved by this award-winning team. As we enter a new decade, ARPR will continue to deliver client campaigns that push the limits of what a PR firm can achieve, while also defining the modern agency business model and leading the conversation about the future of PR.”

ABOUT ARPR
ARPR is an award-winning tech PR agency at the epicenter of the future of PR. Headquartered in Atlanta, ARPR helps its clients’ reputations thrive and their sales pipelines prosper through highly-integrated marketing strategies that push the limits of what a public relations firm can achieve. Since 2012, ARPR has twice been named Small Agency of the Year, dubbed a Best Place to Work six times, was honored as the 2016 Technology Agency of the Year and the 2018 Agency that Gets Results. For more information on ARPR clients and services, visit http://arpr.com and follow @AR_ _PR on Twitter and Instagram.