Ted A. Petty Sr.’s new book “10 Times Over” is an exciting novel about justice and paying for one’s sins

Recent release “10 Times Over” from Page Publishing author, Ted A. Petty Sr., brings a riveting narrative that follows James, a young man who just got out of FEDS, as he devises a plan for payback. 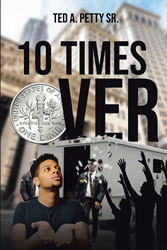 Ted A. Petty Sr., a gifted writer and an amazing father, has completed his new book “10 Times Over”: a gripping and potent fiction about a quest for vengeance and just when James thought everything was over, putting his coconspirators in jail, something came as a surprise.

The Plan
Here’s a story about a young (nineteen) man (James Hope) and some of his closest friends. James and his friends have been together since they were twelve years old. After graduating high school and putting off college for a couple of years, which turned into not going altogether, they found themselves bored, broke, jobless, and almost out of a place to lay their heads. Until one day, Charles (one of James’s friends) had an idea. He wanted to rob the armored truck that ran to the neighborhood grocery store. James and the rest of his friends found this idea to be hilariously stupid and crazy, but Charles was convinced it’ll work. Slowly, he changed the mind of all his friends, and they decided it was possible. Now came the day of committing the robbery.

The Hit
On Saturday morning, June 14, 2000, the robbery of the armored truck was committed, grossing the robbers (six of them) more than six hundred thousand dollars. No one was killed, but one of the occupants of the armored vehicle was critically injured, for supposedly not cooperating. No one knew the identity of these robbers, and a five-hundred-thousand-dollar reward was put out immediately for any help in capturing the bandits.
Sworn Vengeance

On July 1, 2001, after two weeks of testimony, James Hope was found guilty on one count of federal armed robbery and sentenced to ten years in the federal prison system. This marked the day that James Hope swore on his life that he would gain revenge on all those who betrayed him. James now had ten years to think about it.

Early Release
On December 18, 2005, just five years into his ten-year sentence, James Hope was released early for good behavior and prison overcrowding. On his first day out, James put into motion a plan he had been working on for almost four and a half years.

Ten Times Over
It took some time, but James came up with a plan to guarantee that all five of his coconspirators got ten times the amount of time he got. All was going well with his plan a year after his early release. All of his friends were in jail, facing charges ranging from murder to capital murder. But what happened next really threw James for an unexpected loop. What could that be? You’ll have to read to find out!

Published by Page Publishing, Ted A. Petty Sr.’s interesting tale following a crime and a motive for revenge will definitely work the readers up with hype trying to figure out how things will turn out in James’ life.

Readers who wish to experience this thrilling work can purchase“10 Times Over” at bookstores everywhere or online at the Apple iTunes store, Amazon, Google Play, or Barnes and Noble.